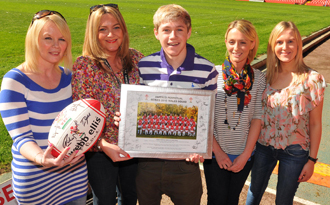 Niall Horan, from X Factor band One Direction, was the talk of the office at Welsh rugby headquarters in the Millennium Stadium yesterday, when he showed up for a VIP tour of Wales’ national ground.

Niall Horan, from X Factor band One Direction, was the talk of the office at Welsh rugby headquarters in the Millennium Stadium yesterday, when he showed up for a VIP tour of Wales’ national ground.

One Direction are currently in Cardiff as part of the hit television show’s live tour and rugby fan Horan popped into the stadium to be shown around by official tour guide Steve Griffen.

The Millennium Stadium has played host to some of the biggest matches in world sport from Rugby World Cup finals to FA Cup finals, Football League play offs and a host of music stars, but staff – who would usually take star visits in their stride – couldn’t resist the chance to meet him.

“He’s lovely and I’ve taken my daughter Sophie to see the show and we had a wonderful time,” said hospitality sales manager Emma Rogers.

“We have had a busy week at the Millennium Stadium in the ticket office and in hospitality with the Barbarians game next month in great demand, so it was nice to be able to take some time out on a Friday afternoon to meet someone who is going to be one of the superstars of music.

“My daughter is going to be very jealous of me, I think they are going to be the new Beatles!”

Jan Hill, from the Millennium Stadium ticket office, Amanda Williams also in hospitality and Leah Brace from the regulations department joined Rogers to meet Horan at pitch-side, part of the official route for all Millennium Stadium tours which run hourly throughout the week.

As well as collecting their own autographs and pictures, the staff presented the One Direction youngster with a signed rugby ball and framed poster of Wales’ 2011 RBS 6 Nations squad.

“It’s a great place and I’ve had a great time on the tour,” said Horan.  “I’m obviously an Ireland fan, but I love watching Wales play.”

Horan’s new friends in the Millennium Stadium ticket office have also invited him back to watch Wales face the Barbarians in Cardiff on Saturday 4th June.

Millennium Stadium tours can be booked online at www.millenniumstadium.com or from 02920822228, tickets to watch the Baa-baas which start at £15 are available from www.wru.co.uk/tickets or by calling 08442 777 888.