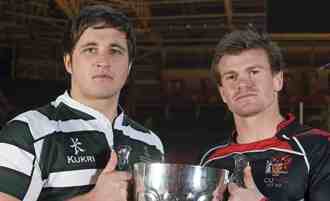 The Millennium Stadium is getting ready for an intense and ferocious battle as university rivals Cardiff and Swansea go head-to-head in their annual Varsity match at the home of Welsh sport tomorrow (kick off 7.35pm).

Both teams have had their share of the spoils in recent years with Cardiff winning the 2008 and 2009 competition, and Swansea winning back the Cup in their last outing. Captains Mark Schropfer and Rhodri Clancy and their respective teams have been training hard for the big test.

Swansea captain Rhodri Clancy admits: "I feel honoured and privileged to be able to lead Swansea out on the field at the home of Welsh rugby. The Varsity match is a culmination of a long and hard season in the British Universities Premiership and is the highlight of the sporting year in Swansea. We have an extremely proud history in the game and will be doing all we possibly can to retain the trophy."

Swansea has a history of established players in the Varsity matches. In the past, Alun Wyn Jones, Dwayne Peel, Rhys Lawrence and Jonathan Spratt have all worn the white shirt. Clancy, currently playing with Neath RFC, is certainly one to look out for in the future.

Cardiff’s Mark Schropfer says: "To play in such an amazing arena as the Millennium Stadium, with the match being televised, is a phenomenal opportunity for everyone involved. There’s no better occasion than a Varsity match with both teams aiming to bring home victory to their university."

Despite losing last year’s match at the Liberty Stadium, things are looking up for Cardiff; they've already gained promotion this season to the British Universities and Colleges Men’s South A and reached the Knockout Men's Trophy final.

"Confidence is high going into the Varsity match and we’ll look to use this on the big stage," adds Mark. "Our training has been intense for the past few weeks with the squad coming together every day to prepare for the occasion. We’ve been training at 7.00 most weekdays on top of the regular sessions. Varsity is an important match for all involved. But Swansea are a very good team and in the league above us at the moment. They’ve been doing well."

The game will be shown live and exclusive on S4C’s Y Clwb Rygbi on Wednesday, 30 March. Jamie Roberts who has played for Cardiff University will join presenters Gareth Roberts and Gwyn Jones on the Y Clwb Rygbi broadcast. Huw Llywelyn Davies and Derwyn Jones provide commentary.