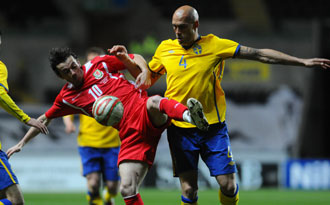 Sports fans all over the world can now apply for tickets to the 2012 Olympic Games which kicks-off with a women’s football match at Cardiff’s Millennium Stadium on 25 July, 2012

With just 500 days to go until the greatest sporting show on earth returns to the UK, a 42-day application period has been launched on the London 2012 official website: www.tickets.london2012.com

From today, 6.6 million tickets will be on sale via the London 2012 website until 26 April 2011. It is not a first come, first served system and there is no advantage to applying earlier in the process.

WRU Group Chief Executive Roger Lewis said: “Today marks 500 days until the Olympic Games and sports fans from all over the world will be thrilled to know that they can now apply for tickets for the greatest sporting show on earth which kicks-off with women’s football at the Millennium Stadium on 25 July.”

The Millennium Stadium will host 11 games in both the Women’s and Men’s football tournaments between 25 July and 10 August, 2012, with two Women’s matches played in Cardiff ahead of the opening ceremony at the new Olympic Stadium in London.

Included among the five Men’s matches will be a quarter-final on 4 August and the Bronze Medal match on 10 August and the eyes of the sporting world will be firmly fixed on what happens at the Millennium Stadium, which has staged a host of major sporting events.

“This is another great example of world-class sports at our iconic venue that continues to welcome the world to Wales for the greatest occasions in sports and entertainment,” added Mr Lewis.

“Fans can expect the very best Olympic football here in Cardiff as well as a warm Welsh welcome in a city that has a great reputation for hosting the biggest sporting events.”

Ticket and accommodation packages will also go on sale in the UK through Thomas Cook branches and on their website www.thomascooklondon2012.com

The London Organising Committee of the Olympic Games and Paralympic Games published its sport schedule earlier this year, with 645 separate sessions currently planned across 26 Olympic sports. The sport takes place against the backdrop of iconic London with venues such as Horse Guards Parade (Beach Volleyball), Wembley Stadium (Football), Greenwich Park (Equestrian and Modern Pentathlon) and Lord’s Cricket Ground (Archery), as well as the new venues currently under construction at the Olympic Park in east London.

LOCOG Chair Sebastian Coe commented: “This is a momentous moment for all involved in London 2012. This starts the journey for those who have been dreaming of getting hold of an Olympic ticket since the day we won the bid in 2005 – these really are the greatest tickets on earth. In the UK, people have 42 days to make their application and I urge everyone to take a look at what sports are available on what days and make their choice. If any sessions are oversubscribed we will run a ballot which we think is the fairest way of allocating tickets.”

Ticket prices were announced last year with a wide range of prices available. Full price tickets start at just £20 across all sports and LOCOG has created an innovative ‘Pay Your Age’ scheme at more than 220 sessions for young people who are aged 16 and under when the Games start on 27 July 2012.

People aged 60 or over when the Games start will pay just £16 at these sessions. The lowest priced ticket for the Opening Ceremony of the Olympic Games will be £20.12, with the highest priced ticket coming in at £2,012.

In addition to the 6.6 million tickets on sale in the UK, up to one million tickets are available for sports fans outside the UK via National Olympic Committees (NOCs) and their Authorised Ticket Resellers (ATRs).

Authorised Ticket Resellers have now been confirmed and a full list of them is available on the London 2012 ticketing website. Customers outside of the UK should contact their local NOC or ATR to find out details of ticket sales in their country.

LOCOG Chair Sebastian Coe continued: “We will also welcome fans from around the world, here supporting their athletes. I’ve often said that those athletes will find a home crowd waiting for them already in London – the same goes for the supporters. London will be a fantastic place to be in the summer of 2012, with a unique atmosphere and we look forward to welcoming the world to our city and to the UK. There is a huge range of tickets available, to see the best athletes in the world competing. My message is simple – be there.”

Postal applications will also be accepted in the UK, with application forms contained in the official ticketing guide available from Lloyds TSB branches in England and Wales, Bank of Scotland branches in Scotland and public libraries in Northern Ireland.

In the UK,on-site hospitality packages are available to purchase from 15 March 2011 through the London 2012 Prestige Ticketing programme at www.prestigeticketing.london2012.com. A levy has been placed on the price of these tickets which will see tickets donated to school children up and down the country every time a package is purchased in London 2012’s innovative Ticketshare scheme.

A range of fully inclusive packages including tickets, accommodation, food and beverages, and transportation is also available from Jet Set Sports from 15 March 2011.

Sebastian Coe commented: ‘We want this to be the greatest show on earth, not the greatest scam on earth, and we want these tickets to be bought by genuine sports fans, who want to be part of London 2012. I would urge caution, be sure about where you are buying tickets from and if they are not an official ticket seller, be safe and don’t take a chance.’