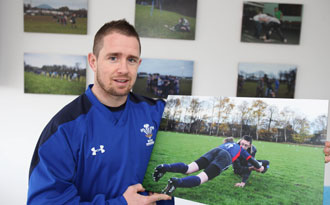 A collection of photographs to celebrate grassroots rugby in Wales was today unveiled by Wales international Shane Williams at the Millennium Stadium on the eve of Wales’ 2011 RBS 6 Nations Championship clash with Ireland.

Images of players, coaches, match officials, supporters and volunteers enjoying the national sport of Wales appear in a permanent exhibition at the main entrance of the home of Welsh sport and will be enjoyed by visitors from all over the world.

The project, organised by the Welsh Rugby Union and University of Wales, Newport, is a culmination of the work of the University’s undergraduate Documentary Photography Programme students Alice Carfrae, Luke Ball and Steven Pepper.

Over a six month period the students travelled the length and breadth of Wales to shoot images of community rugby to show how rugby affects the communities and areas where the national sport of Wales has been a part of life for decades.

As well as action on the field, the students have pointed their cameras at the sidelines and ventured into the changing rooms, the clubhouses and the surrounding streets to see how far the impact of rugby reaches into the communities.

Over 2,500 official hospitality customers will be the first to appreciate the project at tomorrow’s RBS 6 Nations clash before it is seen by ticketholders to all events and over 40,000 visitors that join the official Millennium Stadium Tours each year.

Wales and Ospreys star Shane Williams, who takes his place on the wing for the clash against Ireland tomorrow, said: “This project celebrates the rugby that is enjoyed in communities throughout Wales each week and showcases the people and places that play an important part in defining our national sport.

“An exhibition inside the home of Welsh rugby, the Millennium Stadium, is a fitting tribute to grassroots rugby. They are images that anyone with a passion for rugby in Wales can relate to and it is fantastic that so many fans visiting the stadium will get to enjoy them.”

Geraint Cunnick, Head of Fine Art and Photography at the University of Wales, Newport said: “It is great news that this wonderful exhibition of our students work is now in place to be seen by the hundreds of thousands of people who visit the stadium every year. The University is exceptionally proud that our student’s work is on show in a place which means so much to the people of Wales.

“The grassroots nature of both the photography and the rugby will allow the world to see both Welsh communities in action and the exceptional creative talent of some of our young people.”

A limited collection of the pictures was unveiled at a special media launch in the Millennium Stadium’s Media Centre ahead of this year’s RBS 6 Nations opener against England. The WRU is also planning to exhibit the pictures at other venues around Wales including the local rugby clubs