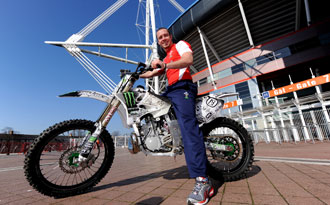 The Wales and Cardiff Blues scrum half shared his ball-handling tips with 2008/2009 FIM World Champion Remi Bizouard, 2010 IFMXF World Motocross Champion Libor Podmol and British No.1 Chris Birch before they launched their motorbikes over his head and through rugby posts to perform tricks with a rugby ball in mid-air.

They will be joined by some of the world’s highest profile riders performing death defying tricks and stunts on dirt-bikes, quad bikes, snowmobiles, mini motobikes and Harley Davidsons in the biggest and most spectacular Freestyle Motocross event ever seen in the UK.

Tickets for the Cardiff show will go on sale at 9am on Friday, 11 March, and Roger Lewis, Group Chief Executive of the Welsh Rugby Union, which owns and operates the Millennium Stadium, urged motorsports fans not to miss out:
“Today marks the launch of the biggest Freestyle Motorsport event ever seen in the UK and I’m thrilled that the Millennium Stadium will play host to Monster Energy Extreme Freestylers presented by Extreme Sports Channel on Saturday, 2 July,” he said.

“Our stadium is now considered one of the top venues in the world for motor sporting events and has become a firm favourite with promoters, riders and fans that have witnessed motor racers push themselves to the limits in our unique multi-event arena.

“Some of the best riders in the world are already gearing up for a unique challenge inside what is a massive arena for extreme sports and entertainment shows right in the heart of Cardiff. This promises to be a spectacular event and, after experiencing a taster of the fantastic action this morning, I urge fans not to miss out.”

For the first time ever the best riders in the world and most famous teams in FMX, Metal Mulisha and Crusty Demons, will join forces to create Extreme Freestylers – a theatrically choreographed shock and awe show described as ‘Cirque Du Soleil meets Jackass on motorbikes.’

Key riders have been rehearsing for the past six months to perfect a series of new jaw-dropping feats. Performed against the largest and most spectacular indoor freestyle set ever built, stars of Extreme Sports Channel and MTV, extreme stunt maniacs The Dudesons will also appear alongside live bands and DJs.

Remi Bizouard said: “This show will be great – a non-competition event on the biggest indoor freestyle set ever seen means we can all bring our very best and try out all sorts of crazy stuff out there. We’ll be able to push each other to new limits with no laps or points on the board – this is hardcore entertainment!”

The Extreme Freestylers riders have taken freestyle to new levels, constantly introducing wilder and more dangerous tricks and stunts in their quest to be the best in the world. From Robbie Maddison jumping 96ft vertically onto the top of the Arc de Triomphe replica in Las Vegas or doing a back-flip over London’s Tower Bridge whilst open, to Heath Frisby backflipping 400kg of snowmobile, they push the limit every day.

Between them the Extreme Freestylers have broken almost every bone in the human body and suffered multiple injuries, including split livers, bleeding brains, lost kidneys and broken backs, legs, arms and necks. Seth Enslow has two titanium plates in his skull to replace a crushed cranium caused by hitting his handlebars after a bad landing!

Extreme Freestylers MD, Adam Bray said: “This show is unique. We’ll have a bigger footprint than even Supercross, so the guys have the space to really show off, and because it’s not a competition the best riders in the world will be enjoying themselves and interacting with the UK fans. It’s not just an extreme sports event – it’s a full-on show, with pyrotechnics, dancers, live bands and DJs, choreography and a chance to see things like the dirt-bike frontflip which has never been seen in the UK.”

Highlights from the Monster Energy Extreme Freestylers presented by Extreme Sports Channel tour will be broadcast later in the year on Extreme Sports Channel bringing all the behind the scenes action and insider gossip to the 25 million subscribers. The 2011 tour will also visit France and Holland, bringing the madness and mayhem live to more than 100,000 extreme sports fans.