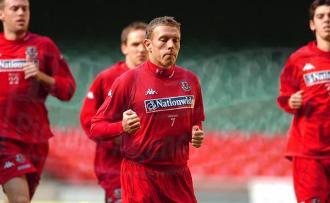 soccer international between Wales and England when the two teams meet in a European Championship qualifier on 26 March, 2011.

Speed’s first competitive home match in charge of his country will be the second time the England football team has played at the iconic, multi-sport stadium at the heart of the Welsh capital and the Football Association of Wales has confirmed that fans have now snapped up all the tickets.

The last time the auld enemy faced Wales in Cardiff, 70,715 fans crammed into the Millennium Stadium on 3 September, 2005 to see a goal from Liverpool’s Joe Cole give England a 1-0 victory in a World Cup qualifier. For the upcoming fixture, a statement on the official Welsh FA site reads: "This match is now sold out and there are no more tickets available."

Millennium Stadium Manager Gerry Toms said: “The Millennium Stadium will host a sell-out crowd when Wales face England in the 100th anniversary soccer match and this is fantastic news for Wales, following two sell-out 6 Nations clashes and an exciting start to the campaign when the auld enemy crossed the bridge earlier this month.

“The rivalry between Wales and England always makes for an fantastic sporting occasion and as the upcoming fixture marks the marks the 36th Welsh soccer international to be staged at the venue, I’m certain we can host another great day out for the fans.”

The Welsh team took their bow at the Millennium Stadium against Finland on 29 March, 2000, and since then more than 1.4 million fans have seen them play at the venue. Their last visit was for the game against Russia in September, 2009.