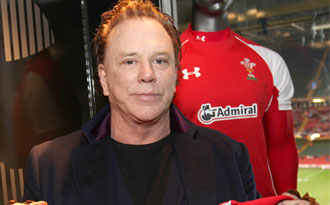 Hollywood film star Mickey Rourke started his homework for the movie about the life of former Wales and British & Irish Lions captain Gareth Thomas at the Millennium Stadium as Millennium Magic kicked off the 2011 Engage Super League season.

It was the first time at a live rugby event for Rourke, who plans to portray the player known as ‘Alfie' after he was inspired by him coming out as gay in December 2009, as Wales’ iconic sporting venue hosted 14 teams for two days of incredible action under the fully retractable roof.

Rourke saw Thomas help the Celtic Crusasers launch their season with a morale boosting 42-12 win over Salford Reds. In an exclusive interview with WRUTV, he said: “It’s a big field compared to what I’m used to looking at and I’m impressed with how fit the guys are.

“We’re not going to make this movie until we’ve done all the proper research. We need to do our homework and I need to train for from nine to 11months.

“I can’t play rugby but I’m a good enough actor and I can look fit enough to play the game and that’s what it’s all about. That’s what I do, I act. I can act like I can play, and play at a high level.

“I’m going to have to train my ass off for probably the last time in my life that I ever have to get in shape and it’s a challenge. I’m looking forward to it but I’m also a little terrified of it.