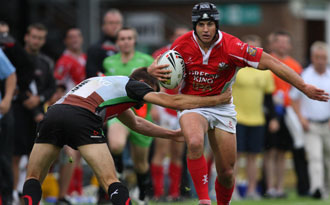 Welsh rugby legend and sports commentator Jonathan Davies has thrown his support behind Millennium Magic and the return to Cardiff for the full first round of Engage Super League XVI fixtures on February 12 and 13.

All seven opening games of the Engage Super League season are returning to the Millennium Stadium, where the Magic Weekend begun in 2007, following a two-year spell at Murrayfield in Edinburgh.

“It is the first round of Super League and it’s a great way to kick-off the season with a big bang.

“To start with so many local rivalries will be very exciting. The opening round of Super League is the first chance for fans to see how all the teams perform and they will all be wanting to make their mark.”

Millennium Magic kicks off in Cardiff with four games on Saturday February 12, the same day as a Six Nations international involving Wales, but Davies hopes that rugby union fans manage to catch some of the Rugby League action on offer at the Millennium Stadium.

“Although Millennium Magic weekend is on at the same time as the Six Nations Wales v Scotland game, which will be popular in Wales, I hope fans in the vicinity can catch the Super League action,” said the former Warrington and Widnes player.

“It is a great opportunity for the rugby union fans who travel to Cardiff to also see some of the Magic Weekend. After the Wales rugby union game they can wander in and still catch some world class rugby with Wigan v St Helens, which is always an outstanding fixture.

“Tickets are great value which is even more reason not to miss out. When Crusaders RL moved to Wrexham it meant there was no Super League in South Wales so it will be great to see the season start with quality Rugby League in Cardiff.

“There are some fantastic local derby matches and it is a chance for Rugby League to make a big impression on Wales.”

There will be high expectations for Welsh Engage Super League club Crusaders RL following their success on the field last season and they are hoping the Welsh public show their support at Millennium Magic.

“Crusaders performed extremely well last season and they have set the standard so there is pressure and expectations for this year,” said Davies.

“It is nice to see a young coach been given an opportunity and I am looking forward to seeing Iestyn Harris perform in his head coach role at Crusaders.

“It’s been tough for Crusaders off the field but as the season starts they will have to put that behind them and work on moving forward.”