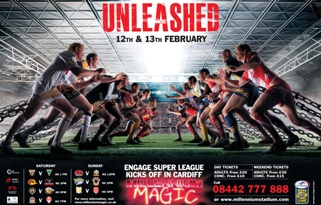 Current ticket sales for this year’s Millennium Magic season-opener are strong with an increase of fans wanting to attend the new format of the event on February 12 and 13 at the Millennium Stadium in Cardiff.

Millennium Magic, which sees its return to the Welsh capital after two years in Edinburgh, has proved popular with supporters wanting to witness the full first round of the Engage Super League XVI and fans are urged to book their seat soon to avoid disappointment.

“Ticket sales for Millennium Magic are up compared to this stage last year, which is obviously very encouraging with five weeks to go until the kick-off event,” said RFL Marketing Manager Phil Williams.

“We are already seeing a significant number of sales in the South West and Wales and hopefully this will continue in the weeks to come.

“It is a little too early to predict a final figure, but we are confident that the attendance will compare favourably with last year’s total. Overall, it’s looking very healthy, and we’re looking forward to the supporters making this a truly unforgettable event.”

The return to Cardiff was largely down to feedback from supporters who expressed their preference of the Millennium Stadium and its proximity to the city centre and local amenities. The move to Round one of the Engage Super League means an explosive start to the season and gives fans their first taste of competitive Rugby League in 2011.

The concept is a fantastic way to kick off Super League XVI, and we felt that 2011 was the right opportunity for us to try it out,” said RFL PR Manager Danny Reuben. “It gives supporters the chance to take a first look at each club’s new signings for the new season, and we’re sure the atmosphere at the event will be electric.

“The games will take place under a closed roof, and that will help us combat any adverse weather conditions that come our way.

“Cardiff is a fantastic city and we’re running a few initiatives in Wales, hopefully there will be a strong turn-out from the Welsh public. We are working alongside the Welsh Assembly, the Welsh Rugby Union and the authorities at the Millennium Stadium to ensure that we’re reaching as many local people as possible.

“Our efforts are complementing the work being done by the Welsh Rugby League, and it all adds to what we hope will be a greater interest from the Welsh public, which is what we are aiming for.

“We’re working with Engage and other partners of Super League on what we can add to the event to make it more exciting for supporters so that they have a memorable weekend.”