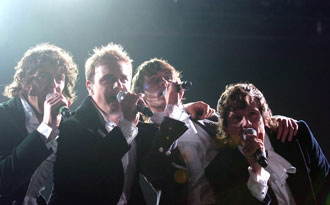 Tickets went on today for Take That’s Progress Live on Tuesday 14 June 2011 at the Millennium Stadium and Ticketmaster are urging fans not to panic, as tickets are still available.

Official statement from Ticketmaster: “Due to totally unprecedented demand all ticket agents across the UK, including Ticketmaster, are struggling to cope with the sheer volume of people logging on to try and buy Take That tickets. The knock-on effect is also creating problems for the UK telephone network, it’s been confirmed that it’s also straining to cope and that call volume is at least twice that of the Michael Jackson on sale last March. We are working to resolve the issues and we are confident that fans will be able to purchase tickets and we ask that they keep trying.”

The Progress Live Tour 2011 will be the band’s biggest tour yet and the first time they have toured together as a five-piece since 1995.

Gary, Howard, Jason, Mark and Robbie, the most exciting reunion in British pop, confirmed at a press conference in London (today) that they will hit the road next year for a monumental 14-date summer stadium tour around the UK before heading to Europe for a further six shows.

Millennium Stadium hospitality packages start from £189 per person plus VAT at www.millenniumstadium.com and 08443 722 722.
.