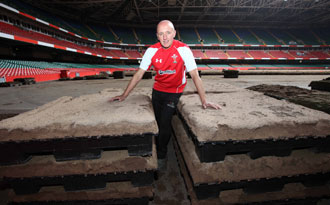 The Millennium Stadium welcomes the arrival of a brand new pitch as the iconic venue prepares to stage the best rugby in the world at the 2010 Autumn Series, which kicks off on Saturday 6 November with Wales v Australia (2.30pm).

Up to 125 trucks are making their way to the city centre venue to deliver the 7,412 pallets which complete the 120m x 79m stage for Wales to face the biggest names in rugby next month.

When the giant pallet jigsaw is completed at the home of Welsh sport, 40mm thick ryegrass turf will be transported from Scunthorpe to host all four Autumn Series games (against Australia, South Africa, Fiji and New Zealand), the 2010 RBS 6 Nations and throughout the remainder of the rugby season.

The turf has been classified as excellent by experts following rigorous laboratory testing but Head Groundsman at the Millennium Stadium Lee Evans is mindful of the task ahead:

“The plan is for the pitch to remain in situ for the entire international rugby season but, while I’m happy with the results that have come out of the lab so far, it is important that my team work especially hard over the coming months to ensure that the pitch is kept in optimum condition,” he said.

Thanks to the round the clock vigil of Evans’ team and the introduction of the lighting rigs, results have shown that the highest standards of pitch quality will remain all season.

And with the Wales Team bus due to arrive at the Stadium in just over three weeks, stadium staff will set about preparing the perfect surface for an international test match at the spiritual home of rugby.

“The Wales team like a hard, fast surface with the grass quiet short and we will be working extremely hard over the next three weeks to get the pitch right for that first Saturday in November when Wales meet Australia at the Millennium Stadium,” said Lee.

Over 25 pitches have been laid since the stadium first opened its retractable roof in 1999; with Mr Evans previously calling for a new pitch per sporting competition if necessary.

He added: “The design and nature of the Millennium Stadium is not conducive to growing grass and we have had our problems in the past because of this. The steep sided bowl, which creates such excellent sight lines for fans, has the side-effect of producing hostile conditions for the pitch; preventing sufficient light or air movement from reaching it.

“Over the years we have learnt from our experiences and adopted various measures to circumvent this problem such as the additional lighting on the pitch which helps the grass to photosynthesise and controlling our fully retractable roof to combat inclement weather.”

The unique palletised pitch system, alongside the retractable roof, plays a huge part in the Millennium Stadium’s reputation as a multi-event venue which has attracted the likes of Sir Paul McCartney, Catherine Zeta Jones, Dame Shirley Bassey and Katherine Jenkins since the pitch was removed following Wales’ Prince William Cup clash against South Africa in June.

On Saturday 6 November, the Millennium Stadium opens its doors to the Welsh rugby fans once more to showcase the best rugby in the world. Tickets can be purchased for all four Autumn Series games at the Welsh Rugby Union’s official website www.wru.co.uk/ticketsand via telephone 08442 777 888 and at Cardiff Arms Store, 8 Westgate Street, Cardiff.

Selected tickets remain from £60 for games against Australia, South Africa and New Zealand and from £20 for adults and £10 for children at Wales v Fiji.