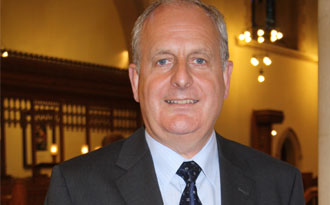 The Millennium Stadium received a prestigious honour from St John Wales during their Investiture ceremony at St Mary’s Church in Swansea over the weekend.

The Priory Vote of Thanks, one of the most esteemed honours that can be bestowed by the organisation, was presented to the Millennium Stadium for the continued support showed to the St John charity.

St John Wales has been providing first aid and medical cover at the stadium since it first opened in 1999 and a strong bond between both organisations has been formed.

Security and Event Manager Ian Peploe collected the award from The Prior for Wales at the special awards ceremony in Swansea on Saturday.

“This is a huge honour for the Millennium Stadium and I am delighted to receive the award on behalf of all staff that have worked with St John Wales at major events since the stadium was first opened over eleven years ago,” said Mr Peploe.

“It’s vital to have the best people employed behind the scenes to deliver the hundreds of world-class events that we have welcomed to Cardiff, and the support of St John is integral to this.

“With world-class rugby coming to the Millennium Stadium next month for Wales’ Autumn Series, we are confident that we are in great shape to deliver four spectacular occasions for Welsh rugby fans and we know we wouldn't be offering the very best of services if it wasn’t for the support of for St John volunteers.”

The City Centre Medical Treatment Centre, which consists of many organisations including the Welsh Ambulance Services NHS Trust and St John volunteers, believe they would not have proved such a success without the willing support of the Millennium Stadium.

The iconic venue shares medical facilities at peak times such as New Year’s Eve each year so that the professionals can treat minor injuries in the city centre without calling on ambulance and accident and emergency resources.

Dr Bob Broughton, Chief Commander for St John Ambulance in Wales, said: “The vast majority of St John Wales’ activities rely heavily on the support of local people, companies and organisations. The support provided by the Millennium stadium has enhanced our credibility as an organisation and we are delighted that we demonstrated our gratitude to the stadium at our awards ceremony.”

Next up on the Millennium Stadium’s events calendar is the Autumn Series and tickets can be purchased for all four fixtures at the Welsh Rugby Union’s official website www.wru.co.uk/tickets and via telephone 08442 777 888 and at Cardiff Arms Store, 8 Westgate Street, Cardiff.

Selected tickets remain from £60 for games against Australia, South Africa and New Zealand and from £20 for adults and £10 for children at Wales v Fiji.