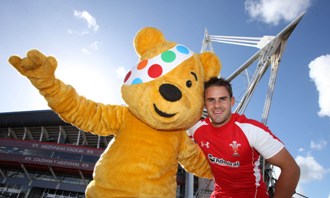 Wales full back Lee Byrne met with Pudsey Bear at the Millennium Stadium today to announce that BBC Children in Need will be bringing a feast of entertainment to the iconic venue for Wales’ Autumn Series fixture against Fiji on Friday 19th November (kick-off 7.30pm).

The annual Children in Need show will beam images of a packed-out Millennium Stadium live to BBC’s nationwide television audience during the half-time break when Wales meet their Rugby World Cup nemesis side Fiji, in the special ‘Children in Need Game’.

Welsh rugby’s Friday night fixture, which traditionally attracts families and groups of children due to the discounted rate available for under 16s, will be enhanced by the star-studded entertainment schedule planned.

The 10-minute show from the hallowed pitch will be broadcast on BBC One in full during the main BBC Children in Need Appeal, which raises huge amounts of money for disadvantaged children.

Byrne, who made his international debut in the Autumn internationals of 2005 when he came on as a replacement full back against New Zealand, is looking forward to a gruelling November series.

“You always remember your first game in a Wales shirt and despite losing the game on the day it was pretty special to make my debut against the All Blacks in front of a capacity Millennium Stadium crowd,” he said.

“The Series this year will be as tough as it gets with Australia and South Africa joining New Zealand and Fiji on the fixture list.

“We will need all the support we can get from the Wales fans on that Friday night against Fiji, we all know what happened when they knocked us out of the world cup three years ago and we only beat them by a point the time before that.

“That would have been my first start for Wales against Fiji in 2005 and we’ve had some great wins since then, beating Australia in 2008 and obviously winning the Grand Slam that year as well.

“It should be pretty special atmosphere on that third Friday in November, knowing we must face Fiji in our Rugby World Cup pool the following year and the ‘Children in Need’ show should really enhance the atmosphere.

“They are always exciting games against the Fijians and I hope we can show this great charity the respect it deserves by replicating the entertainment on display at half time out on the pitch and helping in any way we can with the Appeal.”

“Pudsey may not be ready to take his place in the Welsh team, but he’ll certainly make his presence felt in the Millennium Stadium – and all for the benefit of disadvantaged children and young people here in Wales. Many thanks to the Welsh Rugby Union and the Wales Team for their ready co-operation.”

Welsh rugby has a history of supporting BBC Children in Need to create magical moments for children in Wales and the UK, but this year promises to raise the profile even more with a very special night at the home of Welsh sport and more exciting announcements to come.

There’s still a chance to be part of the rugby action in Cardiff with tickets available from £20 for adults and £10 for children at www.wru.co.uk/tickets and via telephone 08442  777 888 and to personal callers at Cardiff Arms Store, 8 Westgate Street, Cardiff.

Also the WRU has announced an exclusive offer for school and junior group bookings at Wales v Fiji, with one free adult ticket per group of eight children booked (at £10 each). To take advantage of the offer, please contact: rosst@wru.co.uk

For an extra special experience away from the crowds, official hospitality packages can be purchased from £99 per person at www.millenniumstadium.com.

Selected tickets are still available for all Autumn Series fixtures at Millennium Stadium, priced from £60 for games against Australia, South Africa and New Zealand. Visit the WRU website for further details.