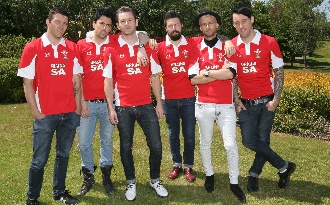 Lostprophets return for ‘Welcome to Wales’

The Millennium Stadium will welcome the return of Welsh rockers Lostprophets as they join a host of Welsh stars for the prestigious 2010 Ryder Cup celebration concert ‘Welcome to Wales’ at the iconic venue on Wednesday, 29 September.

The chart-toppers from Pontypridd will take centre stage alongside Welsh world-famous stars Catherine Zeta Jones CBE, Katherine Jenkins, the vocally-talented Only Men Aloud and Swansea’s Shaheen Jafargholi to honour the arrival of golf's most prestigious event and welcome both the European and United States teams to their homeland.

Like Katherine Jenkins and Only Men Aloud, the rock sextet are no strangers to Cardiff’s multi-event arena after they performed to 74,500 fans when Wales’ international rugby stars faced reigning world-champions South Africa to compete for the Prince William Cup at the Millennium Stadium on Saturday, 5 June.

Since forming in 1998, Lostprophets have steadily built a massive following, with multiple arena tours and headlining festival appearances under their belts. Six Kerrang awards, six UK Top 20 singles, including ‘Burn Burn’, ‘Last Train Home’, ‘Rooftops’ and ‘Its Not The End Of The World But I Can See It From Here’, and three UK Top Ten albums (2004’s Start Something, 2006’s No. 1 album Liberation Transmission and 2010’s The Betrayed), punctuate the adoration for Lostprophets' music that has been a constant presence on the charts and in the hearts of a generation of rock music fans for more than a decade.

Mike Lewis from Lostprophets said: “We’re very excited to be a part of the Welcome to Wales concert. The tradition of sport is huge in Wales, and we know how important it is to the country that such a massive event like the Ryder Cup is being held here. We’re very proud to be part of it.”

Singing sensation Shaheen Jafargholi – who found fame on ITV’s Britain’s Got Talent show with the Michael Jackson hit ‘Who’s loving you’ – will make his Millennium Stadium debut when he joins the stellar line up to celebrate Tthe 2010 Ryder Cup, the biggest sporting event to be held in Wales.

Golf’s greatest team event is staged every two years, alternating between venues in Europe and the United States. This is the first time The Ryder Cup has been held in Wales and the tournament will take place at The Celtic Manor Resort in the City of Newport from October 1-3, 2010, showcasing the nation to a truly global audience.