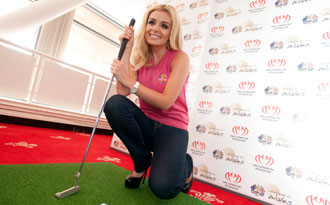 As the nation marks the 100-day countdown to The Ryder Cup in Wales, Katherine Jenkins is the first major artist confirmed to perform at ‘Welcome To Wales’, the celebration concert to mark the start of The 2010 Ryder Cup being held in Wales later this year.

The Welsh superstars will take to the stage at Cardiff’s Millennium Stadium on Wednesday 29 September 2010 and will be just two of the many international stars from the entertainment and golfing arenas to celebrate the start of The Ryder Cup during this special 90-minute televised show. Also on stage as part of the evening will be both the European and United States teams who will be officially introduced to the audience.

As a multi-million selling artist and extraordinary homegrown musical talent, Jenkins is a world-class Welsh act, perfectly placed to feature in the line-up and undoubtedly set to be a highlight of the impressive star-studded show. Having already performed for the Queen, the Prime Minister and the Pope, Katherine will now perform in honour of golf’s most prestigious event and will welcome both the European and United States teams to her homeland. His Royal Highness the Prince of Wales has also expressed his support for the event.

Speaking about her appearance, Jenkins said: ‘I’m delighted to be back in Wales for this very special concert to mark the launch of this landmark event. To welcome the most prestigious and recognised event in the golfing calendar to Wales is a real honour. I don’t think Wales has ever seen anything on this scale so it’s very exciting to be part of it!’

Also pleased to be returning to her much-loved homeland is Swansea sweetheart and Hollywood star, Zeta Jones CBE. As one of Wales’ finest exports, Catherine will bring all the glitz and glamour of Hollywood to Cardiff as she opens this unique celebration concert and welcomes the global audience to her much loved homeland.

With Catherine and Katherine confirmed, it’s not a case of only girls aloud, as celebrated vocal male choir Only Men Aloud will help turn up the volume. The Cardiff-based, Classical BRIT Award winners (Album of the Year) shot to national fame as winners of BBC primetime show ‘Last Choir Standing’ and the 19-man strong choir are sure to win the audience over yet again with a memorable performance at Welcome to Wales.

Ryder Cup Europe will make history as they deliver The 2010 Ryder Cup, the biggest sporting event ever to be held in Wales, with a massive, global TV audience. Golf’s greatest team event is staged every two years, alternating between venues in Europe and the United States. This is the first time The Ryder Cup has been held in Wales, with the tournament taking place at The Celtic Manor Resort in the City of Newport between 1 and 3 October 2010, showcasing the nation to a truly global audience.

Carwyn Jones, First Minister of Wales, said: ‘The whole of Wales is looking forward to The Ryder Cup, which will be a huge event for us. Welcome to Wales will be the ideal way to kick-start what will be a fantastic few days and will show the world the warm Welsh welcome that is awaiting visitors from all over the world.’

European Ryder Cup Captain Colin Montgomerie said: ‘This is an excellent way to celebrate The 2010 Ryder Cup in Wales and will provide yet another opportunity for visitors to enjoy the wonderful Welsh hospitality. The Welcome to Wales event is a great addition to all the plans already in place.’

Millennium Stadium Manager Gerry Toms added: ‘I’m delighted that the Millennium Stadium, which has a proud record of delivering the biggest and best sports and entertainments stars to Wales, will host this star-studded celebration concert to kick off the world-class Ryder Cup event.

‘This is a unique opportunity for fans to enjoy big names in live music such as Katherine Jenkins, while also supporting a piece of sporting history in Wales.

‘Katherine will be familiar with the arena, having performed to capacity crowds during Wales’ international rugby matches and at the Tsunami Relief Concert in 2005, and I’m sure the fans will be looking forward to having her back once again to celebrate this great occasion.’

Tickets go on sale at 11am on Wednesday 23 June from the following outlets:

For more information about Welcome to Wales, please visit www.welcome2wales.co.uk