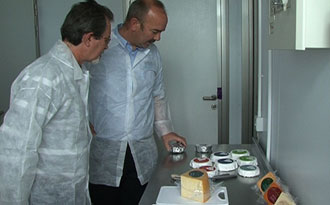 The Millennium Stadium has stepped up its association with the food service industry in Wales, with head chef Malcolm Faulkner saying locally sourced products are set to triple when the national rugby side meet South Africa in June.

The Principality Building Society Summer Test against the Springboks will see the head chef introduce even more Welsh ingredients to his dishes as part of the Millennium Stadium’s commitment to get behind the Truly British, Truly Local campaign – a food sourcing campaign launched by renowned British Chef Gary Rhodes and the Millennium Stadium’s catering partner, Compass Group UK and Ireland, last year.

The Truly Local initiative, endorsed by Rhodes, ensures that the food on the Millennium Stadium’s menu is made from local ingredients and sourced within a restricted radius of Cardiff’s city-centre venue.

Millennium Stadium Head Chef Faulkner is delighted to put his weight behind the campaign that opens up opportunities for small locally-based farmers, growers and producers in Wales.

“Truly Local has boosted business for many farmers and other food suppliers in Wales while providing the same excellent standard of catering to the many thousands of people who visit the Millennium Stadium,” said Mr Faulkner, during a recent visit to Carmarthenshire Cheese Company founded by co-owners Steve and Sian Elin Peace.

“I am planning to introduce a signature Truly Welsh Cheese Board for hospitality customers at the Millennium Stadium.

“I am also going to be adding even more local ingredients to all of my dishes, for example, the wonderful Boksburg soft blue cheese from Carmarthenshire will be used in a delicious cobbler topping later this year.”

The head chef joined rugby’s finest stadium in the heart of Cardiff from the Madejski Stadium in Reading in time for this year’s RBS 6 Nations tournament, during which over 150 kilos of Welsh cheeses and cooked meats and 3500 locally-produced chocolate rugby balls were enjoyed in the VIP hospitality areas

The volumes of some locally sourced products are set to triple when Wales meet South Africa on Saturday 5 June and at each of the Autumn International games at the Millennium Stadium later this year.

At Carmarthenshire Cheese Company, nestled in the heart of milk producing West Wales, 15 local workers arrive at the state-of-the-art manufacturing facility at 6am each day to produce a variety of Welsh cheese with the ingredients drawn from farms close to the site on the Carmarthenshire/ Ceredigion border.

“We are really looking forward to working with the Millennium Stadium and hope that the initiative will generate extra interest in our sales.”