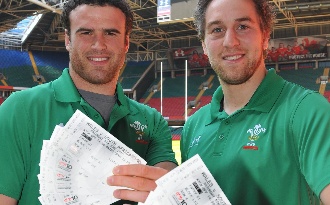 Over 25 000 tickets have been snapped up for Wales’ summer clash with the Springboks on June 5 – before tickets even went on public sale this morning at 9am.

Warren Gatland’s side take on world champions South Africa in eight weeks’ time and Welsh rugby fans have already voted with their feet in filling more than a third of the Millennium Stadium’s 74, 500 capacity.

Tickets are released on general sale this morning (Monday, 9am) but member clubs, debenture holders and supporters pre-registering their interest for the Saturday afternoon summer fixture have already had a chance to book their seats. Over 13,000 people pre-registered their interest for tickets, while member clubs and debenture holders also had an early option on their ticket allocation.

Wales play South Africa in Cardiff just before they travel to New Zealand on an exciting Two-Test summer tour which takes place just over a year before the Rugby World Cup kicks off there in 2011.

And with the kick-off for the June fixture confirmed at 2.30pm, the fixture is appealing to families and supporters from all over the country.

Wales captain Ryan Jones is clearly looking forward to the occasion and is hoping for a rousing send-off for his players as they embark on the summer tour. He said, “The squad will be looking for the support of all Welsh rugby fans when we face the Rugby World Champions. There is nothing better than a full-house at the Millennium Stadium and the roar of a 74,500 strong crowd in June outside of the traditional rugby calendar is sure to boost the players ahead of the summer tour in New Zealand.”

Wales centre Jamie Roberts added: “For every player who walks out onto the pitch to play for their country, the support of the Welsh public is huge and anyone who has had the chance to be at a full capacity Millennium Stadium will appreciate that it is a special place. The support our nation has gone a long way to help us win games in the past and we are hugely grateful.”

WRU hospitality prices for Wales v South Africa at the Millennium Stadium start at £99 for the ‘Bar 10 Braai’ package which celebrates the South African barbecue custom known as braai.

There is limited availability remaining for the ‘Bar 10 Braai’ and fans should act fast to secure the hottest tickets for the game via the website www.millenniumstadium.com

Further hospitality information is available online, including the ‘Platinum Suite’ at £229 and the ‘SA Gold’ at £119 plus vat per person