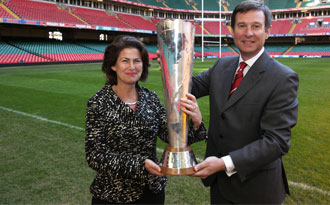 The British High Commissioner to South Africa has paid a visit to the Millennium Stadium in Cardiff in the build up to the international between Wales and the Springboks on Saturday 5 June.

Nicola Brewer also used the opportunity to look at the WRU honours board which boasts the name of her father Trevor Brewer who collected his first cap for Wales in 1950.

During her visit the Commissioner met the WRU Group Chief Executive, Roger Lewis, who welcomed her on behalf of the union.

He showed her the Prince William Cup which was launched in 2007 and is competed for whenever the two nations play each other at home or away.

The impromptu visit was arranged while the Commissioner was in Cardiff on diplomatic business. She said: ”It is a great honour and a privilege to visit the Millennium Stadium which is a truly magnificent sporting venue.

“Being able to see my father’s name on the honours board has been an extra pleasure and a memory I will treasure.”

Roger Lewis said:”We are proud to welcome the Commissioner and it is an added delight to note her strong links with Welsh rugby.

“”We play South Africa here on June the 5th so the timing of her visit is highly appropriate.”