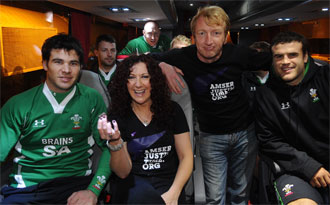 Charity to profit from Italy clash

Tens of thousands of rugby fans are being asked to help a Welsh charity set up by the singer and broadcaster Shan Cothi to raise money for the battle against pancreatic cancer.

A bucket collection will be held around the Millennium Stadium in Cardiff on Saturday March the 20th when Wales take on Italy in their final game of the RBS 6 Nations Championship.

Sixty volunteers will be stationed on walkways around the stadium asking for contributions to the charity called Amser Justin Time.

The collection has been arranged with the support of the Welsh Rugby Union to achieve the dual aims of raising the charity’s profile and cash for the cause.

Shan Cothi launched the Amser Justin Time charity in honour of her husband Justin Smith whose life was cut short by pancreatic cancer at the age of 42.

He was well known in Wales as a successful TV director, editor and musician with the Tigertailz glam rock band.

Some of the money raised helps fund a nurse who looks after people suffering from pancreatic cancer.

Shan recently attended a Wales squad training session along with the actor Steffan Rhodri who is an active supporter of the charity.

Steffan has appeared in an impressive list of films and television roles and most recently is perhaps best known for playing Dave Coaches in Gavin and Stacey.

Shan Cothi said: "I am very grateful to the WRU and to Warren and his players for the support they have given us.

"It was great to meet up with them at the training session and they were all so determined to show their support for Amser Justin Time.

"The bucket collection is a great opportunity for us both to raise money and the profile of the work we do here in Wales to fight pancreatic cancer.

"We work hard to make Amser Justin Time a success and this support from the national sport of Wales will certainly help us a great deal."

WRU Chairman, David Pickering, said:"Amser Justin Time is an extremely worthwhile cause and we are delighted to be able to help.

"I know how hard Shan works for the charity and I am sure the Welsh and Italian fans who attend the game will give generously.

"The WRU knows the devastating impact pancreatic cancer can have because our Head of Legal Affairs, Mike Jefferies, suffered from the disease and died last year."

Amser Justin Time holds regular events throughout Wales to collect funds for the charity and details of its events and work are featured on its dedicated website.

The WRU delivers its core support to the Welsh Rugby Charitable Trust which raises money to help seriously injured former players in Wales.