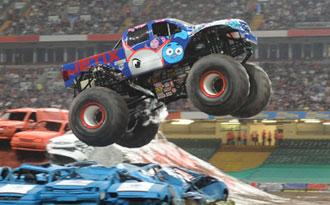 The Millennium Stadium is set to host its fourth consecutive Monster Jam show on Saturday, 9 October, 2010, and motorsports fans will be even further boosted by the news that tickets will be available from 10.00am today (Friday, 26 February) with children’s tickets at half price.

Monster Jam, one of the biggest entertainment events in the US, running around 250 shows and selling 2.3 million tickets annually, brings the world’s favourite monster trucks rip-roaring back to the home of Welsh rugby performing the craziest stunts for one day only.

World-class drivers will be revving up the motorised beasts generating 1,500 to 2,000 horsepower to compete for the top honours, after the popular ‘Monster Jam Pit Party’ first fills the arena with the unique ticket holders getting their favourite driver autographs and photos with the wild racing machines.

"The return of Monster Jam is fantastic news for the fans that have turned up in their thousands over the past four years to enjoy the show," said Millennium Stadium venue sales manager Alex Luff, who brokered the deal with the promoters to bring Monster trucks to the Millennium Stadium for the first time in 2007. "The event is always a great occasion and families should take advantage of the half price ticket offer released today.

"We look forward to working alongside the Monster Jam team once again to guarantee what is always a tremendous spectacle and another example of the versatility the world class venue here in Cardiff’s city centre."

Over one hundred thousand fans have flocked to Cardiff to see the monster trucks, built for high-powered bursts of speed, jump distances greater than 14 cars side by side and up to 25 feet in the air and this year’s show is guaranteed to make a another monster impression.

MONSTER JAM is a unique family experience – Check out www.monsterjam.com for additional details.

Tickets for Monster Jam at 3.00pm on Saturday, 9 October, at the Millennium Stadium can be purchased at www.ticketmaster.co.uk and via telephone 08442 777 888.