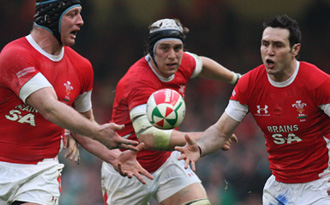 Another Sell-Out Clash at Millennium Stadium

Warren Gatland’s Wales will be boosted by another sell-out clash at the RBS 6 Nations after the final selection of tickets for Wales v France were snapped up by the public today.

Wales play three games at the Millennium Stadium in the 2010 Championship with Scotland first up on Saturday 13 February (2pm) followed by a Friday night fixture against France on 26 February (8pm) and the final home clash with Italy on Saturday 20 March (2.30pm).

Tickets for Wales v Italy can still be purchased at the official WRU website (www.wru.co.uk) and the Cardiff Arms store and hospitality packages are available for each of the fixtures at a selection of prices from www.millenniumstadium.com.

“The support of the fans at the Millennium Stadium makes a massive difference to the players and they talk about how much the Welsh public get behind the team,” said Warren Gatland who announced his 35-man squad on Monday. “Personally I know how much this support means to the players.”

Wales U20s, Wales U18s and Wales Women also face 6 Nations opposition this winter and tickets for the home games are available from £5 at www.ticketweb.co.uk or 08444 771000 and at the Cardiff Arms store.