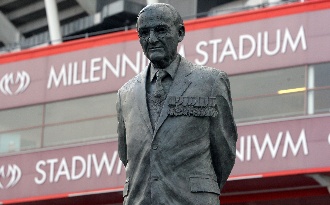 A bronze statue of Sir Tasker Watkins, VC, has been unveiled today at the Millennium Stadium in the heart of Cardiff as a permanent memorial to one of the most accomplished Welshmen of the late 20th century.

It will stand in prominence on the elevated section of the main stadium entrance in Westgate Street where hundreds of thousands of visitors pass by throughout the year when major events and games are staged.

The bronze statue was unveiled by his daughter, Lady Mair Griffith-Williams at a ceremony following a march past by troops and the band from the 2nd battalion of the Royal Welsh Regiment.

Sir Tasker Watkins, who died in September 2007 aged 88, was widely regarded as one of the most influential Welshmen of the late 20th century and achieved global recognition for his achievements in several fields of individual endeavour.

His rise to prominence in rugby administration and the law was achieved after his reputation was secured by a wartime act of bravery which earned him the Victoria Cross for exceptional valour.

He was President of the Welsh Rugby Union from 1993 until 2004 during 11 years which saw the game turn professional, the four Welsh Regions formed and the Millennium Stadium built.

As an accomplished barrister he rose through the judiciary to achieve one of the highest legal positions in the UK when he became the Deputy Chief Justice of England and Wales.

Throughout his life he retained a close and proud association and affinity with Glamorgan Wanderers RFC on the outskirts of Cardiff.

A military march began at Cardiff Castle today, through Westgate Street and to the Millennium Stadium where troops formed a guard of honour at the unveiling ceremony.

Lady Mair Griffith-Williams said: “”I am very proud that my father has been commemorated by this wonderful statue and particularly pleased it is here at the Millennium Stadium. The family is extremely grateful to everyone who has made this possible.”

The concept for a statue at the Millennium Stadium began when Cardiff based businessmen, Mr Stanley Thomas Senior and Sir Stanley Thomas, championed the idea which was then commissioned by the Welsh Rugby Union, the Welsh Assembly Government and Cardiff County Council.

WRU President, Dennis Gethin, said: “This statue is a fitting tribute to a Welshman who achieved such distinction through his involvement in the military, the law and rugby.

“His endeavours displayed astonishing courage, a remarkable intellect, profound wisdom and a sense of honour which earned him the respect of all who met him.

“This statue will serve as a signal to future generations that the dignity and humanity he always displayed are values all of us must strive to emulate throughout our lives.

“I am lucky to have counted Sir Tasker as a friend and, like everyone else who knew him, I was influenced by his example and humbled by his courtesy and caring nature.

“The impact he had on the professional, legal, sporting and cultural life of Wales cannot be underestimated and must be remembered by history.”

The First Minister, Rhodri Morgan, said: “Sir Tasker was a unique individual, and I stand by my belief that he was truly one of the outstanding Welshmen of the 20th century.

“The £25,000 funding from the Assembly Government towards his statue will ensure that Sir Tasker’s remarkable contribution to Welsh rugby and his services as a soldier and judge will never be forgotten, just as he never forgot his roots in the heart of the Welsh Valleys.

“When people visit the Millennium Stadium, they will look up to him as an iconic example of a man who was both gifted and determined, but at the same time, courageous and humble. Now Wales can continue to be inspired by his legacy for years to come.”

“This statue, sited so closely to the national home of the game he loved, is a fitting tribute to an extraordinary man.”

The bronze statue of Sir Tasker stands nine foot high on a concrete plinthe above the ramp at ground entrance three to the Millennium Stadium.

It was sculpted by the Llantwit Major based artist, Roger Andrews, who has built an international reputation as a sculptor of human figures and landmark buildings.

He said: “This is by far the most thrilling project I have ever been involved in.

“I am so pleased that this statue of such a famous and well respected Welshman will be permanently housed outside the home of rugby here in Wales.

“If I never completed another work I am certain this is the one sculpture I passionately wanted to create.

“In order to achieve a true likeness of the man I have spoken to many of his friends and family because I wanted to capture his character as well as his physical likeness.

“Everyone I have talked to has spoken in awe of Sir Tasker who was clearly a great Welshman and also a genuinely likeable individual.”