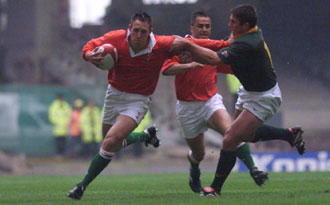 Tell us your 1999 Millennium stories!

We know ‘Prince’ was looking forward to a party, the whole world was expecting a computer crash and certain sectors of society predicted Armageddon – but the Welsh Rugby Union wants to know exactly what rugby fans were doing in 1999.

The Millennium Stadium is celebrating the 10th anniversary of its existence this year and, as part of the celebrations, we want to hear your stories as they relate to what was an eventful year in Welsh rugby.

On the 26th June 1999 we played our first game of rugby at the Millennium Stadium in a now legendary match which saw us beat South Africa for the first time in our illustrious rugby history.

Mark Taylor was the toast of the town after scoring the first try under our new retractable roof, but do you recall what you were doing that day? Maybe you were in a maternity ward and named your firstborn after Mark or the then coach Graham Henry? Maybe you missed the game altogether because of your wedding.

What were you doing on the 1st October 1999, when Wales kicked-off the Rugby World Cup in front of a 74,500 capacity crowd against Argentina – will you be back this year when the Pumas return to the scene of their demise in 1999.

Did you make it to the Manic Street Preacher’s concert on Millennium Eve or the Songs of Praise event the next day? Maybe you proposed in the Millennium Stadium at an event in 1999 or met your future wife or maybe you simply have an amusing story from that year which includes our removable pitch or retractable roof.

If you have a story we want to hear it, we promise to post the best ones back on our website and, if we are really inspired by your story, who knows we may want to ask you back to the Millennium Stadium to tell it in person at one of our anniversary events of 2009.