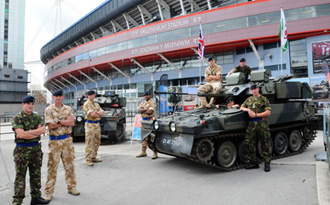 Prince Charles has marked the 50th Anniversary of 1st The Queen’s Dragoon Guards’ Regiment in Cardiff Castle today and armed forces vehicles were in residence at the Millennium Stadium’s city centre forecourt as part of the celebration.

A staggering 108 tonnes of steel, over 300 times the weight of Wales and British and Irish Lions front row trio Adam Jones, Matthew Rees and Gethin Jenkins, were on show for the public while a parade inspected by the Colonel-in-Chief, His Royal Highness The Prince of Wales marched through the city centre.

“The tanks created quite a stir amongst the passing public with amazed tourists stopping to take advantage of the unique photo opportunity with the battle-worn Scimitars and Centurion vehicles,” said Millennium Stadium event manager Marc Davies.

“We’ve had many different shapes and sizes of vehicles at the Millennium Stadium before from Monster Trucks to the limousines which carry the many music stars who have raised the retractable roof at our venue, but these tanks have to be the most impressive.”

The Prince met with former and serving members of the Regiment and soldiers injured during the recent operational tour to Afghanistan.

The past 50 years have been busy for the Regiment which recruits soldiers from Wales. QDG’s lineage stretches back more than 300 years to the formation of the King’s Dragoon Guards (KDG) and the Queen’s Bays (Bays) in 1685. These regiments amalgamated 50 years ago on January 1, 1959, to form QDG. QDG was awarded the Freedom of Cardiff in 1985.

The has seen active service in Borneo, Aden, Lebanon, the 1991 Gulf War, Bosnia, Kosovo, Northern Ireland, the 2003 Iraq War, two further tours of Iraq and, most recently, a deployment to Afghanistan.

The most recent tour in Afghanistan saw QDG soldiers operating across Helmand Province. The Regimental headquarters deployed to Garmsir District where it formed the command element for the new Battlegroup (South). Garmsir had recently been cleared of insurgents in an American-led operation and the battlegroup inherited an area that was slowly coming to terms with the new, legitimate, regime.

A series of displays of regimental life during the past 50 years is also set to take place on the castle green and a band, accompanied by the Gyrlais Choir, will Beat the Retreat this evening.

The party for all members of the serving Regiment, all Comarades and their families follows a host of Welcome Home Parades throughout Wales in July covering Swansea, Hereford, Wrexham and Chester.