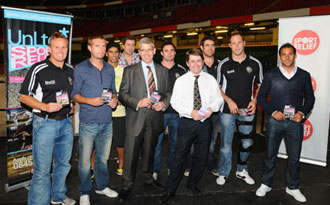 Cardiff City striker Michael Chopra hailed the UnLtd Sport Relief project – the latest Community Event at the Millennium Stadium – saying that, from personal experience, he believes sport is instrumental in keeping today’s children on the straight and narrow.

Chopra joined by City colleague Stephen McPhail and a bevy of boxing and rugby stars from across Wales stepped up to the stage to support UnLtd chief executive Cliff Prior and local Labour MP Kevin Brennan at the launch of the ‘Make it Happen’ project hosted by celebrity Radio One DJ ‘Chappers’ at the Stadium last week.

The striker, who began his career in Newcastle United’s Youth system and went on to play for Sunderland before joining Cardiff City this summer, was thrilled to be invited to the recent Millennium Stadium Community Event.

“I’m really pleased to be involved, the event has been a great experience for the kids here. We can see how these projects get people together, keep children off the streets and, more importantly, keep them out of trouble,” he said.

“I wish that something like this was available when I was younger as I have lots of friends who got themselves into trouble and there was only a handful of us who were dedicated enough to go on to better things.

“Sport has been the biggest positive factor in my life, along with my family and my wife as well. From the age of six my dad would take me to watch football games and from then that’s all I wanted to do. I started to play for Sunday league team, got picked up by Newcastle United and things changed for the best from then.”

The twenty five year old Chopra has had a successful football career already with loan spells at Watford, Nottingham Forest and Barnsley under his belt, has also represented his nation (England) at the Under-15, Under-16, Under-17, Under-18, Under-19, Under-20 and Under-21 levels.

In 2006, Chopra made news for scoring the fastest in Premier League history, as he had only been on the pitch for ten seconds after coming on as a substitute. With an Indian father, he was also the first player of Indian parentage to play and score in the Premier League.

He added: “If you want to be the best then you have to be dedicated to your sport and I think there’s some great role models out there for children today.”