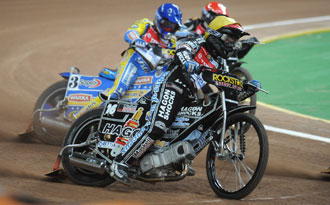 Following the success of Saturday’s FIM British Speedway Grand Prix, BSI Speedway, rights holders of the world championship FIM Speedway Grand Prix series (SGP), has confirmed the date all speedway fans should mark in their 2010 diaries is Saturday 10 July and tickets are now on sale.

Not only will early bookers be able to get up to 10% off 2009 ticket prices if they book their tickets before 01 September 2009, they also have the opportunity to book hotel accommodation at reasonable rates thanks to an initiative by Cardiff’s destination marketing company, Cardiff and Co. This accommodation offer is on a first come, first served basis.

Paul Bellamy, managing director, BSI Speedway said: “Next year’s event marks our tenth anniversary at the Millennium Stadium and once again we will be planning a GP that is bigger and better than we have ever had before. To ensure that even more speedway fans have the chance to experience all the thrills and spills that is part and parcel of the British SGP, we are offering up to 10% off this year’s prices if tickets are booked before 01 September 2009. “

Bellamy continued: “We have also been working with the Millennium Stadium and Cardiff and Co to work out a deal with local hoteliers that will mean speedway fans have the opportunity to secure accommodation at reasonable rates and we are delighted that Richard Thomas and his team at Cardiff and Co have managed to facilitate this.”

Key stakeholders in the city of Cardiff have moved swiftly to ensure that the success of this year’s Grand Prix will be repeated next year and beyond by putting in place a ground-breaking agreement known as the Cardiff Commitment. The agreement between Cardiff & Co, the Millennium Stadium and the Cardiff Hoteliers’ Association will see 20% of the city-region’s bed capacity set aside at reasonable rates for speedway fans.

Richard Thomas, the managing director of Cardiff and Co said, “The Cardiff Commitment reflects the determination of the founder partners to work together for the mutual benefit of their respective businesses and for the local economy in general. The FIM British Speedway Grand Prix in 2010 will be the first beneficiary of our pledge to provide event and conference organisers and their customers with an attractive proposition.

“Reaching this agreement was quite an achievement – with 23 of the city region’s hotels agreeing to set aside over 1000 beds at favourable rates in partnership with the Millennium Stadium and ourselves.

He added, “There is no minimum stay period for the accommodation we’ve secured and I think this is a major step forward. However, the competitive rates we’ve secured also apply to the Friday and Sunday nights so if fans want to see more of Cardiff and the surrounding areas they can book additional nights. In order to take up this offer, an internet link will appear on the online ticket confirmation page issued by SEE Tickets and Ticketmaster directing ticket buyers to a dedicated web site to book their accommodation and this website will also list the full terms and conditions of the offer.”

Millennium Stadium head of marketing Gwyn Dolphin said: “We are delighted with the Cardiff Commitment which helps us attract must-see events to the stadium. The stadium has more than a million visitors a year and it is vitally important for many of those people to be able to stay and enjoy the city to the full.

“We have already had fantastic feedback from the 2009 FIM Speedway Grand Prix organisers and the success of this year’s event has undoubtedly strengthened our relationship going forward.”