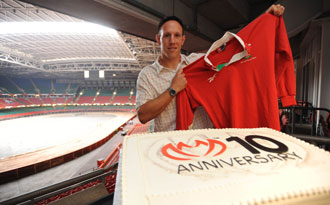 Mark Taylor, the first man to raise Welsh rugby’s now world famous retractable roof to its rafters, has returned to the scene of his Millennium Stadium-opening try, to help celebrate the 10-year anniversary of the venue.

Taylor heads an impressive list of sport and music celebrities to have increased decibel levels on one of the world’s finest stages, with his score during Wales’ historic victory over South Africa on 26th June 1999 – the Stadium’s inaugural event – and a decade later he was on hand to present a birthday cake in celebration of his illustrious feat and of all those that followed.

“It’s amazing to think it was ten years ago and the Stadium’s changed a lot since that day,” said former British and Irish Lions tourist and Wales and Swansea legend Taylor.

“At the time we had a sense of confidence about the squad and a lot of the big players – like Scott Quinnell, Neil Jenkins, Rob Howley and Scott Gibbs – were on form.

“To beat South Africa is one of the toughest challenges that you will ever face, so we knew it was a huge challenge, but we went out there to try and play the game that we’d been playing at recent weeks.

“We’d beaten the likes of France and England and Argentina away as well. It’s one of the few times you play against the Springboks and think you have a genuine chance of beating them and we pulled it off, it was a great way to open the new Stadium.”

The Manic Street Preachers were the first music stars to grace the stadium, in front of a capacity crowd on Millennium Eve and the Welsh supergroup have been followed by a playlist which reads like a ‘Who’s Who?’ of post-Millennium entertainers.

Robbie Williams, Madonna, Rolling Stones, U2, Oasis, Tina Turner, Eric Clapton, Lulu, The Stereophonics, REM, Red Hot Chilli Peppers and Take That together with many more – and some on more than one occasion – have all contributed to the Millennium Stadium’s now established reputation as a must-play concert venue.

“This is my first Stadium gig and I LOVE IT!,” said Madonna at the time of her debut visit in 2006 and she must have meant it as she was back selling out again two years later.

From their 10 million pound stage set in the heart of the Welsh capital last week, Take That thanked the Millennium Stadium crowd for giving them ‘the best job in the world’ as they entertained in the only venue that allowed them to see the faces of each of the fans, according to leading singer/songwriter Gary Barlow, who added ‘you must be very proud of this place’.
The thousands of fans cheered as Jason Orange agreed: “It’s amazing here, this is the first place we’ve played with a roof which is great because apparently it’s raining outside.”

Finland and then Liverpool striker Yari Litmanen was the first to score with a round ball during his country’s 2-1 victory over Wales on 29th March 2000 and there were two more firsts in the same game, with Nathan Blake the first Welsh name on a football score sheet by virtue of an own goal and Ryan Giggs the first to score for Wales.

“It feels like a long time ago, but is something that still remains with me,” said Giggs who went on to play a total of 27 times at the Millennium Stadium for club (10) and country (17) – Wales team-mate Gary Speed has made the most football appearances with 28.

“I’d always hoped to lift the FA Cup in my hometown, I managed to do that and I’m really proud, that’s another thing I will cherish in my career.

“It’s not often you get a stadium slap bang in the middle of a City. Every cup final has seen a brilliant atmosphere, every team’s supporters have enjoyed it, and of course there is a superb stadium to go with it. I’m lucky that I have played major cup finals there.”

Litmanen, who is joined on the Millennium score sheet by some of the greatest names in world football over 82 football matches to have figured to date, including the likes of Giggs, Henry, Rivaldo, Del Piero, Kafu, Iniesta, Van Nistelrooy, Schevchenko, Ronaldo, Gerrard, Giggs, Fowler, Owen, Rooney, Scholes, Fabregas, Pires and Drogba, to name just a few, said:

“We have good memories here, I have never actually lost a game. This is a big, modern stadium – a really nice stadium – and one of the stadiums of the future. It is already ten years old and I would be really proud to have this kind of stadium in Finland.”

In other football firsts Liverpool’s Robbie Fowler scored the first club goal when the Merseysiders lifted the Worthington Cup in 2001 with a victory over Birmingham City; Arsenal’s Freddie Llungberg scored the first FA Cup Final goal in 2001 before his side went down to a double strike from Liverpool’s Michael Owen; Wales’ Robert Earnshaw scored the first and only hat-trick to date in 2004 during a 4-0 drubbing of Scotland; the fastest goal was also scored during a Welsh international with Craig Bellamy hitting the back of the net after just 25 seconds of play and Arsenal’s Francis Jeffers was the first to be sent off in the 2003 FA Community Shield.

Boxer Joe Calzaghe fought twice at the Stadium, his last fights on British soil before he retired unbeaten after double light-heavyweight title battles in Las Vegas. The super-middleweight great always said he felt a special affinity with the venue after making his professional debut at the old Arms Park in 1993 – on the Lewis-Bruno undercard – and he unified that division with his victory over Mikkel Kessler in Cardiff on 3rd November 2007

“Both my Millennium Stadium fights were massive nights and I’ll never forget the sound of 10s of thousands of Welshmen spurring me on in my home city,” said Calzaghe, who retired unbeaten in 2008.

“It’s a privilege to be a part of the illustrious sporting history of the place. It’s only in retirement that you look back with genuine wonder at the kind of atmosphere that only the Millennium Stadium can create, it has been and I’m sure will continue to be the most fitting of venues for some of the very biggest occasions of them all.”

But the full story about the Millennium Stadium is not told until you factor in the motor sport events which have roared into Cardiff.

Over the past four years the Welsh capital has become a second home for the world class Monster Jam event that has wowed nearly 140,000.

World champion Madusa and the only female to roar into Cardiff with high-powered bursts of speed, generating up to 1,500cc to 2,000cc horsepower said:

“I love this venue. This venue rocks and is comparable to venues that run our world finals like Las Vegas and I run world finals all the time, every year, so I can get the feel of the whole venue and so it’s kind of like home. This is home.”

The world rally championship has also featured, horse racing has been in town alongside motorbikes in the form of Supercross and, this weekend, the FIM British Speedway Grand Prix returns for its 9th year after being with the Millennium Stadium from the very beginning, hosting its first meeting on 8th June 2000.

“The Millennium Stadium offers us the complete package in terms of experience and facilities to continue to host the FIM British Speedway Grand Prix at its spiritual home and we are delighted with the support from the fans who travel to Cardiff,” said Paul Bellamy, managing director, BSI Speedway:

“We are proud that we have become a flagship event throughout the ten years and are excited about the successful relationship we have with the stadium.”

“The Stadium quickly surpassed all expectations from that first match in 1999 when the Welsh Rugby Union revealed its crown jewel to the watching world.

“Concert promoters, celebrities and sports stars from around the globe would soon sit up and take notice of what we had created at the very heart of the Welsh capital.

“Ten years on we can afford ourselves a moment to reflect on past glories, but we have plenty more hard work to do if we are to continue to maximise the potential of the versatile, multi-event, multi-functional sporting and musical amphitheatre we all know and love as the Millennium Stadium.

“Part of what has got us where we are today is down to our staffing as well as our facility and our general attitude to incoming events. We have always said that if you can conceive of an event and find a market for it then we have the wherewithal, expertise and infrastructure to put it on and, ten years later, we are still saying that.”