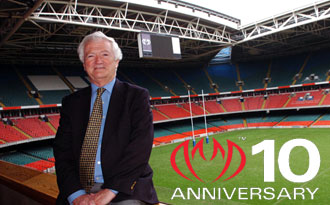 In the first of a series of articles celebrating the 10 year anniversary of the Millennium Stadium, former WRU president Glanmor Griffiths recalls the massive obstacles that had to be overcome to create one of the greatest iconic sporting venues in the world.

It is incredible to think the Millennium Stadium is already 10 years old. It makes you wonder how we ever did without it!

As wonderful as the old Cardiff Arms Park was it simply wasn’t up to scratch for the professional age of rugby. There were many who tried their best to force me to simply upgrade the old stadium, but I knew right from the start we needed a new, state-of-the-art facility.

It wasn’t easy getting the rugby clubs of Wales to share in such a big vision for the future, and the Welsh public took some convincing at the start, but once people grasped the principle it was full steam ahead.

The great thing about looking back 10 years to that first game is that I now realise how unfinished the project was. We had to move all the cranes out to bring in a pitch on which to play the game against the Springboks and we only had 26,000 people in the ground.

The day after we’d all enjoyed one of the most famous victories in Welsh rugby history, we had to take the pitch out again, reinstall the cranes and get cracking on finishing off the stadium in time for the big kick-off of the 1999 Rugby World Cup on 1 October.

There were many knockers, those who said we would never have it ready on time. In the end, we delivered it on time, within budget and hosted the greatest World Cup to that date, providing each of our co-hosts, England, Scotland, Ireland and France, with a £5m profit.

In many ways the attitude to the Millennium Stadium project at the start was typically Welsh – we didn’t think we were good enough or big enough to pull it off. What the building of the stadium proved is that, as the Welsh nation moved into a new millennium with a new system of government, we were able to showcase our talents and match the best in the world.

No wonder that the media very quickly described the stadium as the modern day icon of Wales. And for those people who thought it might become a white elephant, just listen to the news from the WRU this week.

Wasn’t it great to hear Steve Phillips, the Union’s Group Finance Director, announce that revenue generation from the stadium over the past decade has now surpassed £1 billion. If I wanted to be smug I might say ‘I told you so’.

For as well as providing a huge morale boost to the Welsh nation, the Millennium Stadium has become a vital income generator for Wales’ national sport. If we hadn’t built the stadium I doubt we would have won the Grand Slams in 2005 and 2008 or won the Rugby World Cup Sevens in Dubai this year.

I am proud to have played a part in the development of the whole concept of the Millennium Stadium and to have delivered it on time and within budget. But the real heroes were the Welsh rugby clubs initially and then the magnificent workforce from Laings. We should never forget them, nor the role played by Cardiff City Council.

Everyone said I was mad when I first started talking about bringing the FA Cup final to Cardiff, along with all the other major FA and Football League matches. The closure of Wembley Stadium was a factor, but to begin with they wanted us to pay for the privilege of hosting their events.

I can still close my eyes and see a dozen cranes dominating the Cardiff skyline in the early days of construction. I can still hear the doubting Thomases saying it would never be built on time.

Now, you never hear anything but praise for a stadium that is so often singled out as one of the greatest sporting arenas in the world. That was always the motivation – to create a venue that would carry on the great traditions of Cardiff Arms Park.

I think we achieved that and more. Happy Birthday!