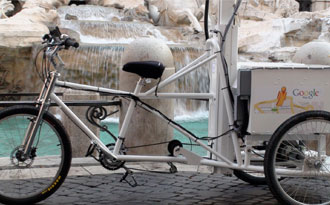 The Millennium Stadium has one week remaining to top some of the nation’s greatest tourist attractions – such as the Eden Project, Loch Ness and Stonehenge – and fix its date with the new and groundbreaking Google Trike.

Last month Google & VisitBritain asked the British public to name their top tourist treasures to bring to Google Street View via the Google Trike and voting for the shortlisted attractions will end early next month.

The Trikes have the same capability as Street View cars for collecting street-level imagery and are designed to help Google make special imagery collections in places less accessible by cars, such as historic landmarks and narrow paths. Google was flooded with over 10,000 suggestions, ranging from the well-known to the more unusual, reflecting the breadth of culture and history within Britain.

Millennium Stadium venue sales manager Alex Luff is delighted that the Millennium Stadium has made it into the final voting stage and urges the British public to get behind the iconic venue that has brought a decade of big names and events to Cardiff.

“The stadium has put on some fantastic shows over the last few weeks to round up what has been a superb and exciting decade here in Cardiff,” said Mr Luff. “This month alone we’ve welcomed the world-class Monster Trucks, indie-sensations Oasis and the hugely popular Take That Circus Tour to the same arena where Cardiff Blues reached the semi-finals of the Heineken Cup just weeks before and Ireland lifted the Triple Crown and RBS Six Nations title.”

He added: “As was noted by Take That’s Jason Orange last week, the stadium’s retractable roof allows any event to be staged here regardless of the British weather. And we are proud that our city centre location has encouraged over 10 million fans to the major events staged here in Wales.

“As the public cast their final votes for the Google & Visit Britain poll, we urge the 10 million plus fans that have enjoyed themselves at the Millennium Stadium to get behind us and put the venue on the ‘Google Map’ for many more to enjoy.”

Richard Thomas, Managing Director of Cardiff & Co, the organisation charged with promoting the capital said: “It doesn’t surprise me that the Millennium Stadium has been voted amongst the top attractions featured on Google Street View.

“To my mind, it is like no other stadium in the world – docked as it is like a vast ship in the heart of Cardiff’s city centre. The stadium has been instrumental in elevating Cardiff to the premier league for major events and conferences – with over ten million people passing through its gates since its inception 10 years ago.

“I would urge everyone to get voting online this week to ensure that the Stadium takes its rightful place at the top.”

Britons can cast their final vote from within the five categories to decide which three locations the Google Trike will visit first (pending good weather this summer). The categories are: Castles, Coastal Paths, Natural Wonders, Historic Buildings & Monuments and (Sports) Stadiums. A link to the voting page can be found at: www.maps.google.co.uk/streetviewinfo.

Google said: “We’ve been thrilled with the suggestions made by the British public and are excited to see where our tricyclist will visit first. Whatever takes a person’s fancy, from the modern to the historic, the natural to the man-made we hope the public will get voting to put their tourist gems on the map.”

Due to operational factors such as light levels and the weather (and what could be a pretty tired cyclist), the trike will only be in the UK for a limited time during the summer. Images collected by the trike will be processed and carefully stitched together, a technological process that can take several months. They will be made available at a later date in Street View on Google Maps.