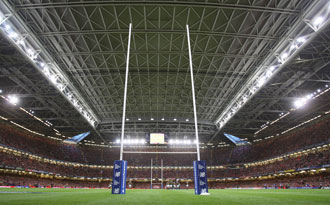 Stadium’s £1b boost to Wales

The Millennium Stadium’s economic impact on the national economy has crossed the billion pound mark.

Back-to-back double concert sell-out dates with Take That last week attracted over 120,000 music lovers to the Welsh capital in the space of 48 hours and, with the 10th anniversary of the Millennium Stadium’s opening (26th June) just days away, WRU Group Finance Director Steve Phillips believes the landmark figure has now been surpassed.

A study commissioned by the WRU regarding the Stadium’s first seven years in operation to 2006, published by marketing agency Econactive Ltd in November 2007, estimated the financial benefit of Wales’ national stadium to the economy of the country to be in excess of £105m a year.

The report estimated the total impact was £735m and so Phillips is now adamant the significant billion pound figure has been achieved, with some 85 per cent of this money staying in the Cardiff area. Spending at that level is also thought to support up to 2,400 full time jobs a year.

In addition, as the Welsh Rugby Union Group owns and operates the Millennium Stadium, any profits earned from the stadium are re-invested into the development of the game ranging from elite to community rugby in Wales.

Since 2006, with events such as the Rugby World Cup in 2007, the increasing attendances to the Autumn International series, the continuing success of the Six Nations tournament and an impressive array of concerts and other sporting events the average of £105m per annum is believed to have been exceeded providing the £1b impact.

"The Millennium Stadium has attracted more than one billion pounds into the Welsh economy in its first 10 years," said Phillips. "Visitors attracted to the stadium number over one million a year with almost half of them from outside Wales.

"This makes us far and away the premier tourist attraction in Wales and easily within the UK Top Ten; one of only a handful of attractions outside London of this scale.

"During its construction, the then Millennium Commission provided £46m of funding towards the overall cost of the project, there is therefore a very strong argument to say the Stadium has been the most successful of the Commission’s projects."

The Millennium Stadium is estimated to contribute around 17 per cent of Cardiff’s tourism value and around 23 per cent of the City’s tourism dependant employment – the study also states.

"There is plenty for us to celebrate in the 10th anniversary year of the home of Welsh rugby, the Millennium Stadium has continued to go from strength to strength," continued Phillips.

"Our event calendar is as strong as ever with the recent Take That concert the perfect example of the power of the venue in attracting visitor numbers to Cardiff and Wales. Concert goers came from all corners of Britain and beyond, they consumed 3,000 hospitality meals on our premises alone, nearly 1,000kg of chocolate, 7,000 portions of pizza and 4,000 glasses of Pimms were sold.

"The demographic of this group of visitors to Cardiff is in stark contrast to the 300,000 or so rugby fans we hope to bring through our doors over four international matches in November, or the 40,000 plus motor enthusiasts who will attend the FIM British Speedway Grand Prix this Saturday or even the expected sell-out crowd watching U2 in August."

The Millennium Stadium has re-designed its logo for the coming season to celebrate the 10 years since its opening event on the 26th June 1999 – the historic 29 -19 victory for Wales’ international rugby side over the visiting South Africans.

In its first full year a total of 23 commercial events were welcomed to the Stadium and the Speedway this weekend will be its 290th major commercial occasion, giving a yearly average of 29 significant attractions on show each year.

This summer surpasses the Stadium’s finest ever concert season, previously in 2001 Bon Jovi played the Cardiff venue at part capacity, the Stereophonics at 50,000 and sell out double-dates with Robbie Williams brought the house down, but this summer sees four likely capacity concerts for the first time in the venue’s history.

"Our concert business has never been better and the important thing we have now established, over the ten year history of our venue, is a consistent ability to attract and successfully deliver the biggest acts," says Phillips. If you are a major artist or band and you are touring in Europe then the Millennium Stadium has become a must play venue for you.

"In addition to concerts, and many other sporting attractions, we offer a staple diet of rugby union and we have four teams coming to play Wales this November whose combined IRB World Ranking is 10 points better than the four teams we face during the Six Nations.

"The quality of events we have on offer in the Millennium Stadium calendar this year is better than ever."

The new Millennium Stadium anniversary 10-year logo will be seen for the first time on a rugby ticket this November when New Zealand are the first side to face Warren Gatland’s Wales side, followed by Samoa, Argentina and Australia.

"The Autumn Series in 2008 was our finest yet in terms of match attendances and the hospitality offering proved extremely popular. All these factors helped contribute towards the financial performance of the WRU Group and the 2009 series has a hard act to follow, but we have made an impressive start with the fixtures we have on offer," added Phillips.