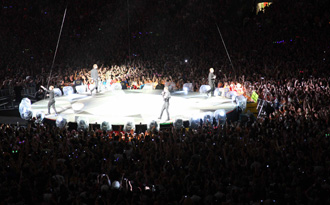 Take That praise the roof

Over 120,000 revellers have partied at Cardiff’s premier live entertainment venue over the past two nights for the band’s second album tour since their reunion in 2006 – which brought the band to Millennium Stadium for the first time on their Beautiful World tour the following year.

From their 10 million pound stage set in the heart of the capital, the band thanked the crowd for giving them ‘the best job in the world’ as they entertained the only venue that allowed them to see the faces of each of the fans, according to leading singer/songwriter Gary Barlow.

The thousands of fans cheered as Jason added: "This is the first place we’ve played with a roof which is great because apparently it’s raining outside."

– The retractable roof weighs in at a staggering 8,000 tonnes. The sliding mechanism that ensures its smooth opening and closing is some 220 metres long and 15 metres high

– There are 10 roof trusses, five on each side, each weighing 560 tonnes

– The roof takes 20 minutes to open, currently costing around £2.54 in electricity