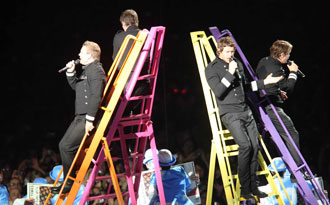 Take That made their magnificent Circus Live tour debut at Millennium Stadium to over 60,000 fans at the sell-out gig last night and the good news is that Gary Barlow, Mark Owen, Jason Orange and Howard Donald will be doing it all again tonight.

The band broke the record for the fastest-selling UK tour of all time when tickets were released last November and proved that they’re better than they’ve ever been as the circus came to town and fans enjoyed the Greatest Day out in Cardiff.

The nation’s favourite boy band also pulled classics like A Million Love Songs out of their theatrical bowler hats lifting the capacity crowd to their feet in Cardiff’s multi-event arena. And while hits from the chart-topping album Circus were enjoyed by the thousands – the boys are preparing to Shine once again with hours remaining until their next Cardiff gig.

Stadium manager Gerry Toms knows all about the hard work that goes on behind the scenes during high-profile events at the Stadium and explains that this week in particular has been a busy one for staff at the venue.

He said: "We will all be working around the clock and it takes a massive co-ordinated effort between us and the promoters to make sure we get it right. Last weekend the Oasis people were gone by Saturday and we had 24 hours to prepare for the Take That team who came on Sunday.

"We have had 150 cleaners working around the clock to clean the stadium ready for a 4pm start today and they will be back tonight to do the same for tomorrow, and again for tomorrow night."