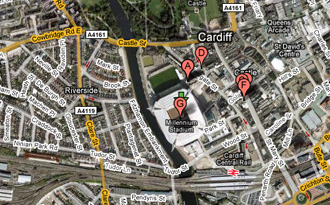 The Millennium Stadium has been shortlisted as one of the top attractions to feature on Google Street View and the Stadium is urging the British public to get behind the venue as they cast their final votes this week.

Last month Google & VisitBritain asked the British public to name their top tourist treasures to bring to Google Street View via a new, groundbreaking invention – the Google Trike. The Trikes have the same capability as Street View cars for collecting street-level imagery and are designed to help Google make special imagery collections in places less accessible by cars, such as historic landmarks and narrow paths.

Google was flooded with over 10,000 suggestions, ranging from the well-known to the more unusual, reflecting the breadth of culture and history within Britain.

“With the biggest retractable roof in the UK, and a city centre location, the stadium guarantees to stage a stunning show whatever the weather and this is a great prospect for fans travelling to the major events that we’ve held here.”

Mr Luff added: “As the public cast their final votes for the Google & Visit Britain poll, we urge the 10 million plus fans that have enjoyed themselves at the Millennium Stadium to get behind us and put the venue on the ‘Google Map’ for many more to enjoy.”

Britons can cast their final vote from within the five categories to decide which three locations the Google Trike will visit first (pending good weather this summer). The categories are: Castles, Coastal Paths, Natural Wonders, Historic Buildings & Monuments and (Sports) Stadiums. A link to the voting page can be found at: http://www.maps.google.co.uk/streetviewinfo

The finalists are as follows:

Justin Reid, Head of Online Marketing for National Tourism Agency, VisitBritain, said: “People have really been caught up in the potential of the Street View Trike with thousands nominating the locations they’d like to see captured on camera. They’ve suggested familiar and unfamiliar attractions from Scotland to Land’s End, the east coast to the west and everywhere in between.”

Google said: “We’ve been thrilled with the suggestions made by the British public and are excited to see where our tricyclist will visit first. Whatever takes a person’s fancy, from the modern to the historic, the natural to the man-made we hope the public will get voting to put their tourist gems on the map.”

Due to operational factors such as light levels and the weather (and what could be a pretty tired cyclist), the trike will only be in the UK for a limited time during the summer. Images collected by the trike will be processed and carefully stitched together, a technological process that can take several months. They will be made available at a later date in Street View on Google Maps.

The new-look Millennium Stadium website already makes use of overhead aerial photograph Google Map technology to provide fans and event-goers with an interactive map facility on its travel pages (http://www.millenniumstadium.com/travel).

Utilizing that Google Map technology also allows the Millennium Stadium’s Venue Sales Department to illustrate the geographical position of the venue in the context of Wales, the UK, Europe and globally, and its location at the hub of major road, rail and air transport networks.