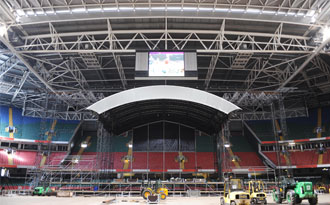 The home of Welsh rugby was today being transformed into a theatre of rock and roll as an enormous stage was installed to host the return of rock legends Oasis to Cardiff this weekend (Friday, 12 June).

The metal structure is taking shape in the bowl of the stadium to replace the 7,400 pallets of turf, removed by up to 180 low-loader vehicles this month, to signal the start of a season of concerts and events in the Welsh capital.

The stage will be completed in time for the all-important sound checks at the Cardiff gig, when the stadium will open its 8,000 tonne retractable roof for the Gallagher brothers’ biggest ever tour of open air venues in the UK and Ireland.

Immediately after the show, as Manchester’s finest head to rock the Theatre Antique de Vienne in France, the stage will be dismantled and a new stage installed to make way for the return of pop sensation Take That – the second act to return to the Millennium Stadium for a double-bill since ex-band member Robbie Williams filled the multi-event arena on two successive nights in the summer of 2001.

Millennium Stadium Manager Gerry Toms said: "This is a major construction project taking place in the heart of the city, but few people get to see it happen.

"It is a fascinating and intricate task involving a team of skilled technicians who are all experts at their jobs.

"The turnaround is achieved against a tight deadline but that is how rock tours work and everything gets completed in time."

The Millennium Stadium is renowned for attracting the biggest and best live acts to Cardiff since its first concert rung-in the Millennium with more than 50,000 revellers turning out to enjoy Wales’ leading band, the Manic Street Preachers.