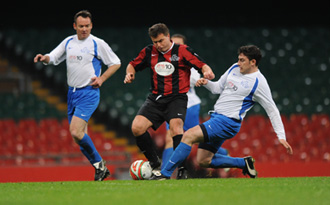 The UK’s leading entertainments executives laced their boots for the first-ever promoters’ football event on the hallowed turf of the Millennium Stadium yesterday.

Each year the ILMC’s charity collection, The Nikos Fund, raises money for a registered charity to commemorate the life and contribution to the ILMC of one of the founding members, the late Nikos Sachpasidis.

At the annual charity auction, DF Concerts, one of Europe’s leading arts and concert promotion companies, scooped the exclusive prize to raise money for nominated charity Floga – a European charity for parents of children with cancer.

Managed by CEO Geoff Ellis, DF Concerts is the promoter behind one of Europe’s most successful music festivals, T in the Park, working with a huge number of diverse artists from cutting edge unsigned talent to the music industry’s biggest stars.

Mr Ellis was delighted with the exclusive Millennium Stadium prize and pulled together his very own ‘dream team’ from the UK music scene to rival a ‘rest of the world’ team skippered by David Aiken of Aiken Promotions in Ireland. Millennium Stadium Venue Sales Manager Alex Luff welcomed his industry contacts to the iconic venue on and off the pitch yesterday – as goalkeeper for Ellis’s team.

Alex said: "We were delighted to offer this opportunity at the ILMC this year which not only raised a significant sum for charity but also extended our thanks to the industry’s promoters. They have played a major role to help raise the profile of Wales’ iconic stadium and provide over £100m per annum into the local economy.

"This year, as we reach the 10th anniversary, we celebrate a decade of major events and it’s impossible to forget the host of musical highlights staged here – global stars such as Madonna, U2, the Rolling Stones, Bruce Springsteen and Take That."

He added: "The promoters and ourselves work tirelessly to ensure that these events are delivered to an excellent standard, and we’re thrilled to work together each year to create the unforgettable Millennium Stadium experience.

"Our multi-event arena benefits from the largest retractable roof in the UK, and I am sure this was enjoyed by the promoters yesterday as we were able to keep the rain out of the bowl during a tiring yet thrilling, 80 minutes of football on the hallowed turf."