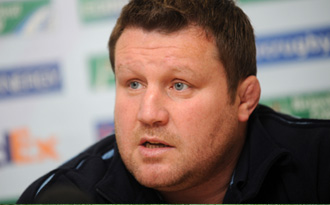 Young calls rugby fans to get behind the Blues

Cardiff Blues coach Dai Young has issued a clarion call to Welsh rugby fans to get behind his team and pack out the Millennium Stadium for the Heineken Cup semi-final clash with former double champions Leicester Tigers on Sunday (kick-off 3pm).

It is the biggest and most prestigious regional rugby match ever played in Wales and the Blues are one big performance away from becoming the first Welsh region to contest a Heineken Cup final. The Anglo-Welsh semi-final will decide who goes to Edinburgh for the showpiece final next month and – with current ticket sales are around the 35,000 mark – tickets can still be purchased from a number of outlets this week.

Young said: "I’m confident that we will have a lot of Blues supporters at the Millennium Stadium on Sunday but I’d also like to think that we can attract some Welsh rugby fans that perhaps support the other regions on a week to week basis to get behind us for this mini international."

He added: "There were buses coming from everywhere to Cardiff for the quarter finals and I’m sure that it will be the same this weekend."

The 2001 and 2002 kings of Europe are bringing over 10,000 of their fans down for the game, with 20 buses making the trip down the M5 to the home of Welsh rugby. Blues captain Paul Tito, who has already led the team to one cup final with the capture of the EDF Energy Cup, believes that home support can inspire the Blues and swing things their way.

"I am sure all those who were at the Millennium Stadium for the Heineken Cup quarter-final win over Toulouse, and those who travelled to Twickenham for the EDF Energy final, will be there once more and it would be tremendous if we could have a crowd over 50,000," said Tito.