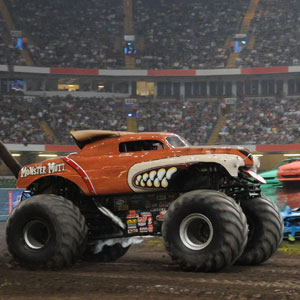 The Millennium Stadium will introduce two new World Champions when Monster Jam returns to Cardiff for the UK’s only show on Saturday 6 June 2009.

Tom Meents, the 2009 Monster Jam Racing World Champion and most decorated driver ever in Monster Jam history with eight world championships, will be stunning event-goers in the Maximum Destruction truck alongside tour sensation and former Monster Jam Rookie of the Year, 2009 Freestyle Champion Damon Bradshaw in El Toro.

These pilots are at the top of their game and guarantee an unbelievable event as they face off against former world champions, Grave Digger, Madusa (a newcomer to Cardiff) and Batman, not to mention crowd favourites Donkey Kong and Monster Mutt.

Side-by-side is the traditional format – the first truck, with the least penalties, across the line is the winner, Tom Meents is the man to beat here. The freestyle competition allows drivers a limited amount of time on the open floor to show off their skills and outrageous tricks, jumping and crushing as many obstacles as possible. Damon Bradshaw specialises in outrageous tricks and will be keen to impress.

The monster trucks themselves are sure to impress too. Each is around 11 feet tall and 12 feet wide. They are unique custom-designed machines and weigh a minimum of 9,000 pounds. The tyres alone are 66-inches tall.

Monster trucks are built for short, high-powered bursts of speed; these beasts generate 1,500 to 2,000 horsepower and can hit speeds of up to 100 miles per hour. Monster trucks can jump a distance of 110 to 115 feet (a distance greater than 14 cars side by side) and up to 25 feet in the air.

Cardiff has become a second home for Monster Jam and this show promises to be the best yet. Don’t miss out on seeing our newly crowned World Champions do their thing. Monster Jam is one of the biggest and most popular entertainment events in the US selling 2.3 million tickets annually, now it’s Cardiff’s turn to hear the roar.