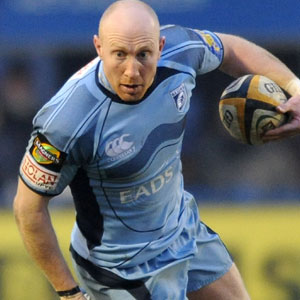 Shanklin’s focus is on European showdown

Tom Shanklin is putting all thoughts toward British and Irish Lions selection to the back of his mind as the small matter of qualifying for the semi-finals of the Heineken Cup takes up his full attention.

The Blues centre toured with the Lions to New Zealand in 2005 and is tipped to make Ian McGeechan’s squad to South Africa but as far as Shanklin is concerned, beating Toulouse in the Millennium Stadium quarter-final on Saturday is his only priority at the moment.

“Everyone keeps talking about the Lions tour, but that’s at the end of the season,” he said. “Right now we’ve got this week to focus on and it’s a huge game for us.

“There are hopefully two or three big games left for Cardiff this season. That’s all we can focus on. You can’t really think too much about the Lions. We’ve got a job to do this weekend and it’s a big one.

“It’s huge. It’s the next step up to international rugby and that’s the way it’s going to be played.”

The French aristocrats tormented the Blues at the same stage of the tournament last season, running out comfortable victors 41-17. However David Young’s side have improved dramatically since then and qualified as top seeds at the end of this season’s pool stages.

“This is a massive game for us and for me personally it’s huge,” added Shanklin. “We played them last year in Europe. We didn’t play great so we owe them one really and there’s no better place to play them than at home. It’s a big job because they are a class side, but we’ve got to look at ourselves and how we’ve improved from last year to where we are now.

“It’s a task, but we are playing them here in Cardiff and we know it’s going to be a good atmosphere. We’ve had some great games at the Millennium in the past with the Blues.

“We played Gloucester there in Europe earlier this season and played very well and we want to use that factor this weekend. It’s always easier when you are playing in your home environment.”