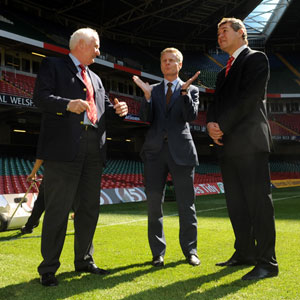 A high powered visit to the Millennium Stadium by senior officials of the London Organising Committee for the Olympic Games has turned the spotlight on the decision to host international soccer matches in Cardiff during the 2012 tournament.

Mens and womens international matches will be held at the Stadium and watched by television viewers around the world.

They met to discuss the plans for Cardiff to feature in the Olympic Games before David Pickering and Millennium Stadium Manager, Gerry Toms, led them on a tour of the city centre building.

David Pickering said:”It was a very positive meeting and we are delighted at the prospect of bringing such important action from the Olympic Games here to Wales at the Millennium Stadium.

“We own and operate a magnificent stadium and we are excited at the prospect of it being featured in television coverage of such an important worldwide sporting tournament as the Olympic Games.”