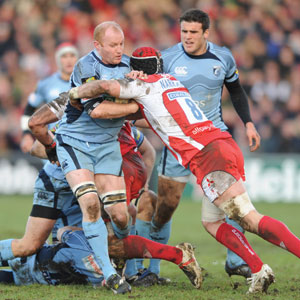 The Stadium welcomes the Cardiff Blues for their third tournament match on the national ground having played Leicester Tigers in front of a 26,645 crowd in 2006 and more recently claiming a thrilling bonus-point win against Gloucester on Sunday 19 October 2008 in front of 27,114 fans.

It is the first Heineken Cup quarter final to be staged at the Millennium Stadium which has hosted three of the tournament’s finals here in Cardiff.

WRU Group Chief Executive Roger Lewis said: “We are delighted to be hosting this prestigious quarter-final for the Cardiff Blues who have been superb in the tournament so far.”

“There was an electric atmosphere here at the Millennium Stadium when the Blues entertained over 27,000 fans with their win over Gloucester and we urge all Welsh supporters to come along and enjoy what is bound to be a great occasion.”