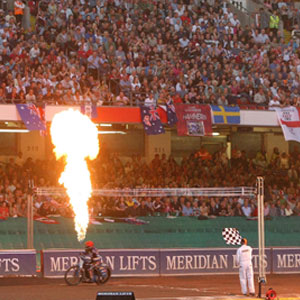 The growing popularity of the FIM Speedway Grand Prix series held at the Millennium Stadium has forced organisers to bring forward the Cardiff showpiece event to an earlier start time.

“We are now coming into our ninth consecutive year at the Millennium Stadium and in a way the FIM British Speedway Grand Prix has been a victim of its own success,” explained Paul Bellamy, managing director, of BSI Speedway.

“As the popularity of the event has grown it has been increasingly difficult to accommodate all the fans wishing to stay in Cardiff on the Saturday night. By moving the start time to 5pm it allows supporters the option of either staying in the city overnight or returning home on the same day as the event.”

Fans who book their tickets before 31 December 2008 will be able to purchase them at 2008 prices.