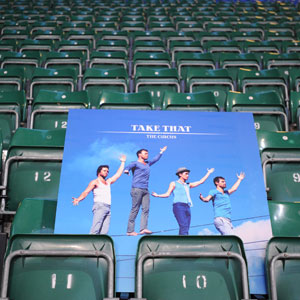 Take That back-to-back at the Millennium

The Millennium Stadium has been handed a double date with Take That after the band announced a new 17th June concert for its ‘The Circus Live’ summer 2009 tour – the 20th and final show to be added.

The Cardiff city centre multi-event venue’s 16th June show sold-out in hours and every other date on the tour, which traverses Britain and Ireland throughout June and the first week in July, has also put up the sold out signs already.

‘The Circus Live’ concert marks the first time the Millennium Stadium has been re-booked for consecutive shows due to such high demand since 2001 – that year it was ex-band member Robbie Williams who sold-out a 14th July concert and re-opened the following night.

Take That last played the Millennium Stadium on 21 June 2006 in front of a 60,000 plus capacity concert crowd and their double return is being welcomed as a great honour by venue bosses.

“To get them for a second date is a real shot in the arm for the Millennium Stadium and for all their fans in Wales, the South of Britain and beyond who had thought they had missed out on the chance to see them on their sell-out tour this summer.

“We fully expect tickets for this new gig to be snapped up as quickly as those for the first night and would very much advise fans to get in touch as early as they possibly can.”

This final show will take ticket sales for The Circus Live over the 1 million mark, and to celebrate an exclusive VIP prize will be awarded to the person who purchases the millionth ticket!

The prize package will include a hospitality box, hotel, food & drink and a commemorative disc that will be personally presented to the winner by the band on the day of the show.

“The fact that we will be selling the millionth ticket of the tour has not been lost on us and it is a huge honour for the Millennium Stadium to be hosting the Take That show which will mark such a significant moment in the band’s illustrious history,” added Mr Lewis.

Take That Present: The Circus Live, broke all UK box office records when tickets for the 14 date stadium tour went on sale in October. Toppling Michael Jackson’s 1987 Bad Tour as the fasting selling tour in UK history, 19 stadium dates have now all sold out, with over 950,000 tickets snapped up by fans.

Take That’s new album The Circus, the long awaited follow-up to the nine times platinum Beautiful World, was released on 1 December through Polydor Records and shot straight to the top of the charts, becoming one of the fastest selling albums of all time (taking the third biggest first-week sales total in history).