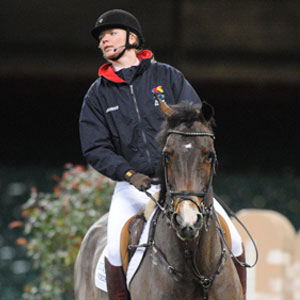 The celebrity gave a model performance to outwit her rival in between the serious business of riders competing for a first prize of £100,00 in the inaugural event which brought the world’s top riders and horses to Cardiff, just hours after Wales had brushed aside Australia in a rugby international.

“It has been 15 years since I last competed in show jumping events but I thoroughly enjoyed it,” said Kidd.

“What a magnificent stadium and what a great event. For spectators to be able to watch every rider in every discipline from one seat on one day is something that I feel should grow from here. I got such a buzz doing this on the back on Strictly Come Dancing and I hope it takes off.”

Of the 19 riders, only six completed the daunting combined show jumping and cross courntry event. Oliver Townend and Flint Curtis ran away with the biggest eventing prize ever. They finished nearly 42secs ahead of runner-up Lucy Wiegersma and Shaabrak while William Fox-Pitt came third on Ballincoola.

Organizer Stuart Buntine was delighted to see the event so well received.

"We wanted to do something special to bring this sport to a greater audience. We had the best riders in the world and the best horses and to win the £100 000 first prize, it was always going to be a serious and challenging competition.”

Millennium Stadium Manager Gerry Toms never had any doubts that the stadium would deliver an exciting display.

“It was always going to be a big challenge but the 12 hour turnaround between Wales v Australia and Express Eventing certainly once again showcased the Millennium Stadium’s versatility in hosting two world class events in two days,” he said.