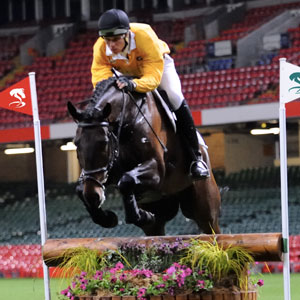 The Millennium Stadium will be transformed from a rugby stadium to an equestrian arena on Saturday night after the Wales take on Australia in the final Test of the Invesco Perpetual Series.

The Millennium Stadium will host its very first equestrian event on Sunday – the Express Eventing International Cup. The equestrian sport of eventing is to be showcased as never before with the launch of a fast-paced, glamorous new form of the sport .

Express Eventing will condense all the skills and excitement of traditional eventing into just half a day under the roof of the Millennium Stadium. For the very first time, spectators will be able to watch all three disciplines – dressage, show jumping and cross-country – from one seat, and follow the progress of every horse and rider at each stage of the competition.

An unprecedented line-up of internationally renowned riders is set to compete for the £250,000 prize pot, including Olympic medallists, European champions, World Cup title holders and winners of many of the world’s major international eventing competitions. Never before has this elite group of riders competed together under one roof.

Strictly Come Dancing judge Arlene Phillips and musical mastermind Andrew Lloyd Webber are lined up to give their outspoken views on the freestyle dressage to music, while Strictly Come Dancing competitor Jodie Kidd and Tara Palmer-Tomkinson will go head-to-head in a celebrity jump-off.

The Express Eventing International Cup is being organised in association with British Eventing, the sport’s governing body in Great Britain, and is being billed as eventing’s Twenty20.

Buntine, director of Tricorn Events, the organising company, said: "Eventing is a lifelong passion of mine and one that I would like more people to experience and enjoy. We hope that having Arlene, Andrew, Jodie and Tara involved will help us demonstrate why it’s such a great sport. The Millennium Stadium is a majestic venue and we are extremely lucky to be able to host our inaugural event there.

"With the rugby match on the Saturday, it is going to be a big challenge to turn the stadium into an equestrian arena and we have just 12 hours to do it. The riders will start to arrive at 7am to work out their horses, so there is no room for any delays," he added.

Millennium Stadium Manager, Gerry Toms, said: "The task of preparing the Stadium is slightly more complicated given that we have a sell-out rugby international less than 24 hours before. But one of our strengths is the ability to turn the stadium around from one event to another very quickly and this is a fine example of that."

WRU Group Head of Marketing Gwyn Dolphin added: "We are thoroughly looking forward to hosting the inaugural Express Eventing International Cup this November. The Millennium Stadium is used to hosting a range of events throughout the year from Monster Jam and the British Speedway Grand Prix to Madonna and Bruce Springsteen. This is another example of the stadium’s versatility as a world class entertainment venue.

"We look forward to working alongside the Express Eventing team to guarantee a tremendous spectacle."