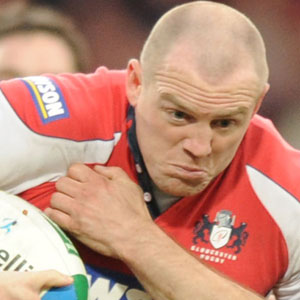 Something will have to give when the Millennium Stadium opens its gates to Heineken Cup action again as Cardiff Blues take their huge Anglo-Welsh Pool 6 showdown against Gloucester Rugby the short distance next door to the national ground on Sunday.

The teams both made winning starts in Round 1, the Blues trouncing Italian champions Rugby Calvisano 56-20 while Gloucester beat Biarritz Olympique 22-10, and the Millennium Stadium collision could ultimately have a huge bearing on quarter-final qualification next year.

While there have been five finals in the Welsh capital, three of them at the Millennium Stadium, the Blues will be playing a tournament match at the ground for only the second time. When they met Leicester Tigers there in the 2006/07 competition a crowd of 26,645 saw the English club edge home 21-17.

"Next weekend is a really massive game – probably the most important game for us in the Pool stages," said Gloucester captain Mike Tindall. "The environment, the atmosphere and the whole occasion is going to be huge and hopefully we will find out what our boys are made of.

"And if you can’t get up for a game against the Blues at the Millennium Stadium in front of a huge crowd then there is something wrong with you. How we turn up and how we get our game right will determine how we get on.

"I have not seen much of the Blues this season but last year I was impressed with the way they tried to play, so this week we will do our homework and analysis on them although we already know they have a lot of good ball carriers and skilled players.

"What we are focusing on is trying to get our own stuff right as we know that if we do that we are good enough to come away with a win."
Gloucester have won all three previous Heineken Cup meetings between the teams, including a 21-15 quarter-final win at Kingsholm in 2001, and will be out to deny the Blues that debut head-to-head victory.

"The win over Biarritz was a great start for us and the choices we made were the right ones although we were a bit disappointed we did not score a few more tries," said Tindall. "There is still a long way to go in this tournament. We shot out of the traps last year, had a bad period through the winter and the game against Munster came a couple of weeks to early. This time we have to make sure we turn up at the end of the Pool stage of the tournament and get through our group and into the knock-out stages."