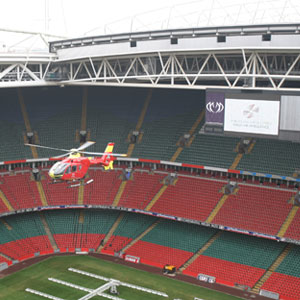 The New Generation helicopter in action is a typical example of a model that Wales Air Ambulance is striving to replace its existing helicopters with, through its £1 Appeal and special awareness Week this month.

Sporting and entertainment celebrities were at the Millennium Stadium to see the New Generation Helimed fly into the stadium and land inside the arena including Wales rugby legends JJ Williams, Barry John, JPR Williams, John Dawes, Mervyn Davies and Paul Thorburn.

Chairman of the Charity, Mr. Bob Palmer, said: "We are indebted to the Millennium Stadium for providing this fantastic venue to allow us to demonstrate a New Generation helicopter.

"These aircraft are faster, more powerful and have a greater lifting capacity; and most importantly allows far greater access to the patient whilst airborne.
The Charity is wholly dependent on fundraising, and with the continued support from the people of Wales we are hoping to achieve our target and be in a position to announce the date of implementation of these helicopters to further enhance the services provided to the Principality."

WRU Group Chief Executive Roger Lewis said: "We were delighted to be able to offer the Millennium Stadium as the venue for the landing of Wales Air Ambulance’s New Generation helicopter.

Wales Air Ambulance Week will highlight the ongoing £1 Appeal, with the Bring £1 to Work scheme, asking businesses to simply make their £1 contribution collectively at their place of work.

The pound coins collected will help reach the £4-million annual cost to operate the New Generation helicopters that need to be introduced by 2009, in line with Civil Aviation Authority legislation.