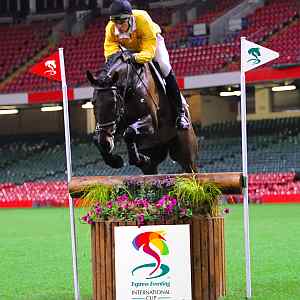 The Millennium Stadium is set to host a brand new equestrian event which could revolutionise the Olympic sport.

On the day after Wales take on Australia in the final Test of the Invesco Perpetual Series 2008, horses and riders will replace rugby players on the world famous Millennium Stadium pitch for the first ever eventing tournament ever to be held at the venue.

Team GB’s Mary King and William Fox-Pitt are set to join other top world performers as they compete for the Express Eventing International Cup on November 30.

The event will enable spectators to watch riders compete in all three eventing disciplines – show jumping, dressage and cross-country – from one seat on one day which is a radical departure from the traditional three-day event format.

Millennium Stadium Manager, Gerry Toms, said: “This event is the first of its kind for us which is a challenge in itself.

“The task of preparing the Stadium is slightly more complicated a rugby international less than 24 hours before.

“But one of our strengths is the ability to turn the stadium around from one event to another very quickly and this is a fine example of that.”

“The event is the first of its kind and we are delighted that it is taking place here. The Millennium Stadium is used to hosting a range of events throughout the year from Monster Jam and the British Speedway Grand Prix to Madonna and Bruce Springsteen. This is another example of the stadium’s versatility as a world class entertainment venue.

“We look forward to working alongside the Express Eventing team to guarantee a tremendous spectacle.”

Stuart Buntine, director of Tricorn Events, the organising company, said: “Eventing is an equestrian triathlon and arguably the ultimate test of the partnership between horse and rider. But that can make it quite a challenging sport for the spectator to understand and follow.

“I believe that Express Eventing will encourage many more people to engage with the sport. Spectators will not only enjoy the very best of the world’s riders at close quarters, but the stadium technology will ensure they know exactly what’s going on and what each rider has to do to win.

“It will be a fast-paced, fun and dramatic day out for the whole family to enjoy, whether they are equestrian enthusiasts or entirely new to eventing. It will be sport and entertainment at its very best.”

The inaugural event, the first of what organisers hope will be a series of events around the world, will offer total prize money of £250,000.

Tickets for the November event are priced at £35 and £45 for adults with half price tickets available for children aged fourteen and under. Tickets are available from Ticketmaster on http://www.ticketmaster.com/ or by calling 08705 582582