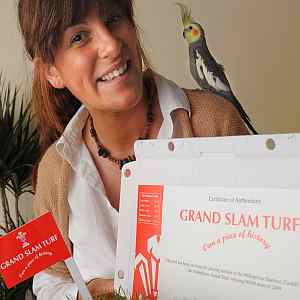 A Cockatiel – nicknamed Elvis – was found by Millennium Stadium staff hiding in pallets of Grand Slam Turf last weekend and bosses have mounted a search for its owner.

The six inch tall songbird, who has a yellow head and red cheeks, has been living in a temporary cage at the Stadium’s 24hr indoor security office, but will be shipped off to a specialist bird sanctuary if its rightful owner does not appear soon.

Elvis was found on Sunday morning whistling his favourite ‘car alarm’ style tune and pecking away at the grass, which has been boxed up and stored on site to be sold off to rugby fans who want to purchase their own piece of Grand Slam history.

Millennium Stadium events manager Claire Jenkins has taken him under her wing ever since and trawled the internet for information about the correct conditions to keep him in and to ensure he has the right food to eat.

“He looked a little bedraggled when we found him and had obviously been sheltering from the rain in the Grand Slam turf boxes, which we had laid out to give them an airing,” said Jenkins.

“I’m expecting a baby myself in the next few months so I suppose my maternal instincts kicked in and I have been trying to look after him, but it is important we find his owners.

“Apparently these birds are often kept in pairs, they are very friendly and if they don’t have a mate then they need a lot of attention.

“Elvis has been entertaining everyone in the office, but its time for him to leave the building.”

If you think Elvis could be your lost pet, please call the Welsh Rugby Union on 02920 822000 to claim him.
To buy a piece of the Grand Slam turf which Elvis liked so much, all you have to do is logon to www.wru.wales/wru-store/ with each gift box retailing at £19.99 plus post and packaging.