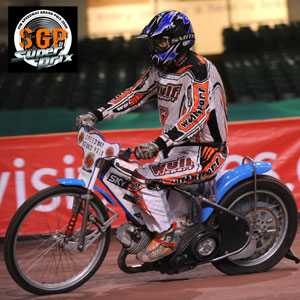 The thrilling event guarantees to provide entertainment for all the family, where as well as sporting action there will be music from the brilliant Belinda Carlisle, freestyle motocross riders and a firework display by a world championship display team.

Yesterday afternoon, Stadium Manager Gerry Toms donned the riding gear and took to the track on a 500cc bike with no brakes or gears to get a taste of the excitement that awaits the riders and crowds at Saturdays Grand Prix.  He exclaimed

"Compared to that, Motorcycles are easy! These bikes do 0-60 in 5 seconds, and as the saying goes, no brakes, no gears, no mercy! It was great fun, an absolutely fantastic experience.  Saturday night will be very exciting and I’m really looking forward to it."

The FIM Meridian Lifts British Grand Prix has become the biggest and most exciting event in world speedway. This year it will be bigger than ever before, as it will be the third of four qualifying rounds of the $200,000 Super Prix, which sits alongside the World Championship.

The 500cc bikes, which have quicker acceleration than F1 cars, will compete in a ruthless 23 heat race night. It is two and a half hours of guaranteed thrills, spills and all round entertainment under the floodlights of the Millennium Stadium. It’s one of the best sporting atmospheres of the year and a night that no motor sport fan should miss.