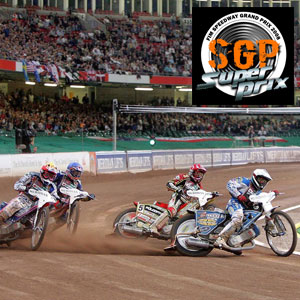 The top 16 riders in the world, including current world champion Nicki Pedersen, will compete in the British leg of Speedway’s eleven round World Championship Series.

Britain’s Chris Harris raised the roof last year with a spectacular home win and he will again be in the line-up and wanting to claim his second British SGP title. He will be joined by fellow British hope Scott Nicholls, who will also be going all out to secure a win in his home Grand Prix.

The FIM Meridian Lifts British Grand Prix has become the biggest and most exciting event in world speedway. This year it will be bigger than ever before, as it will be the third of four qualifying rounds of the $200,000 Super Prix, which sits alongside the World Championship.

500cc bikes with no brakes and acceleration quicker than an F1 car, in a ruthless 23 heat race night. It’s two and a half hours of guaranteed thrills, spills and all round entertainment under the floodlights of the Millennium Stadium. It’s one of the best sporting atmospheres of the year and a night that no motor sport fan should miss.

As well as the sporting action there will be music from the brilliant Belinda Carlisle, freestyle motocross riders and a firework display by a world championship display team – something for all the family to enjoy!